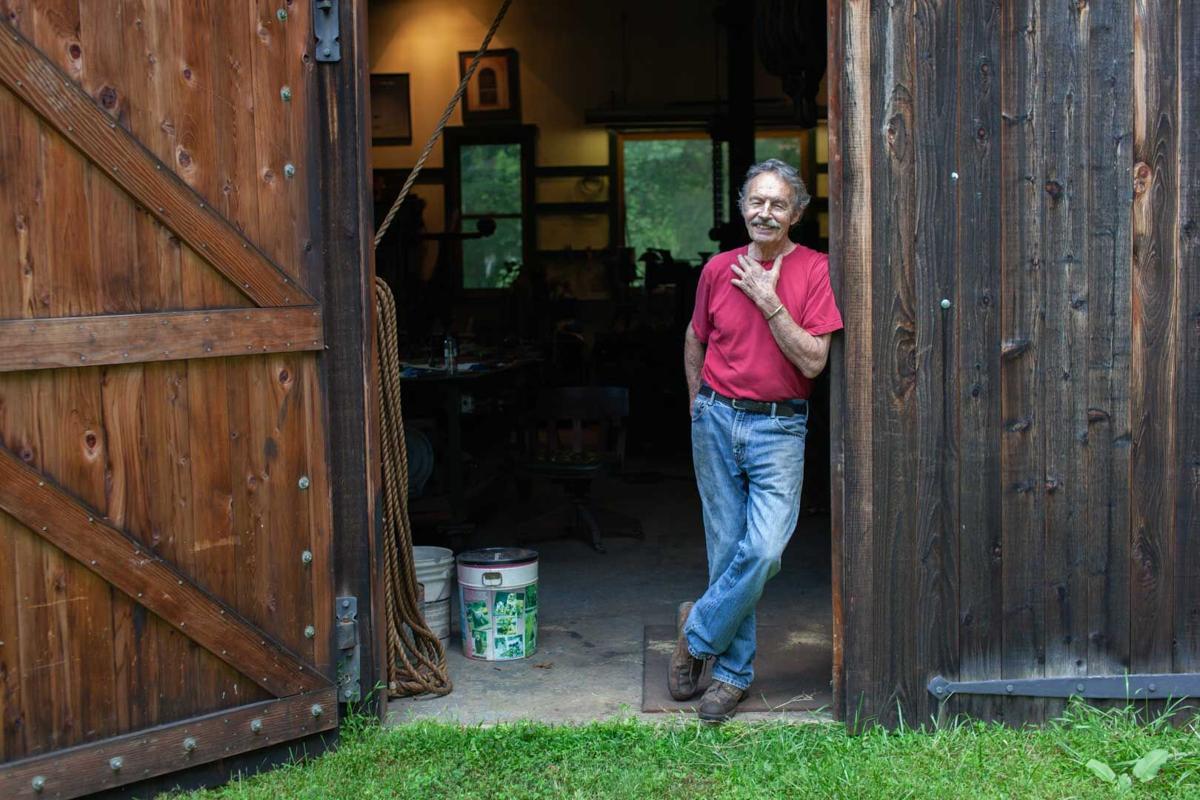 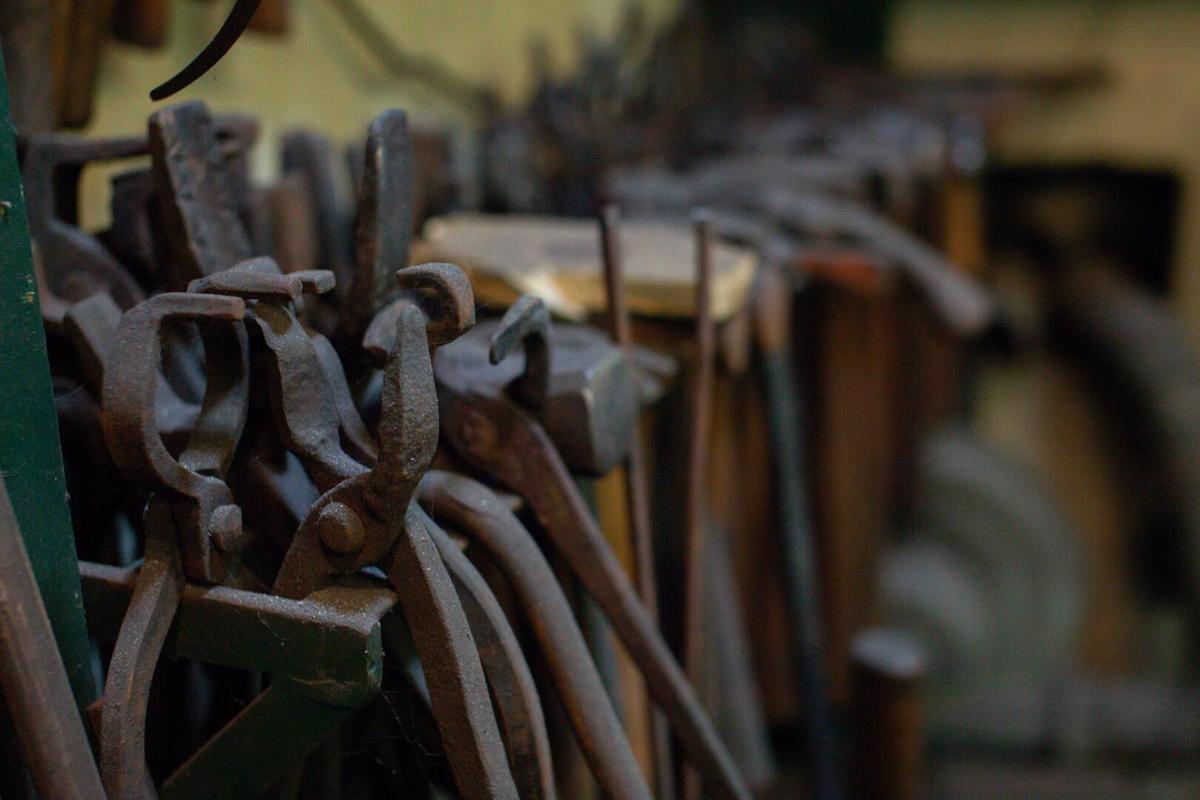 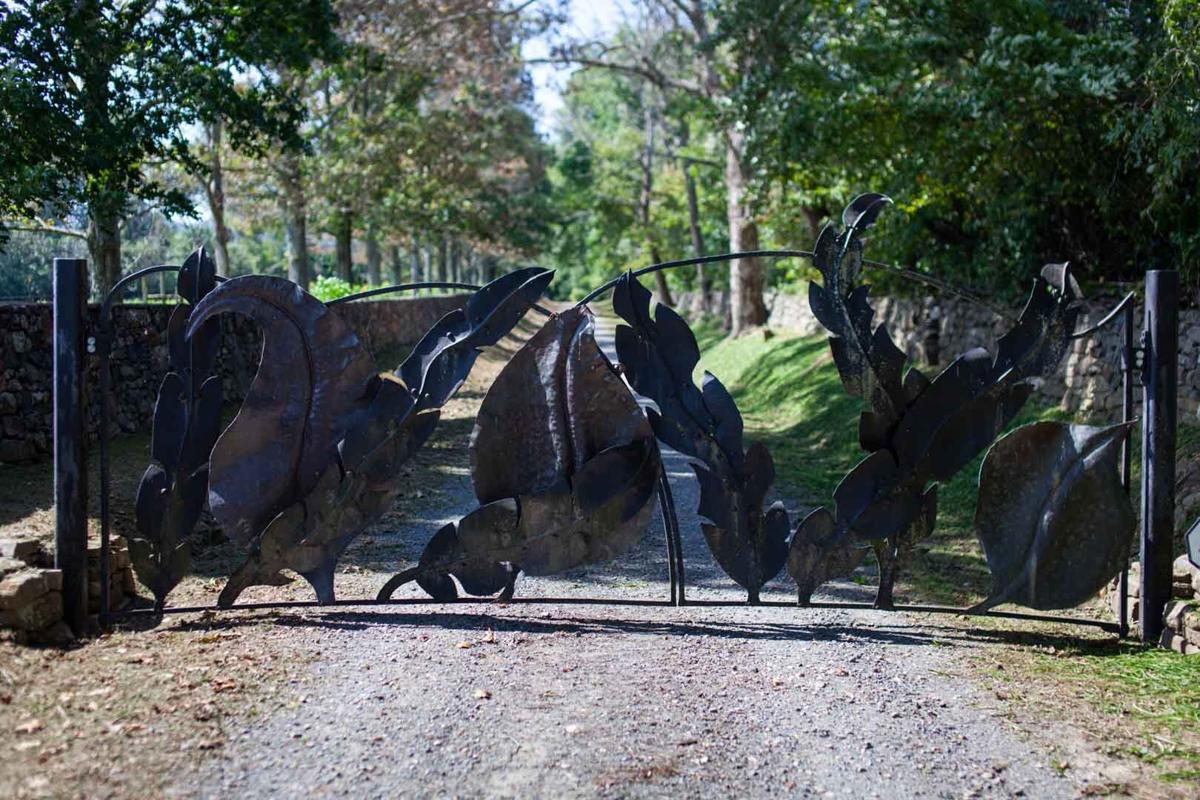 Entrance gates by Nol Putnam at home in Tiger Valley. 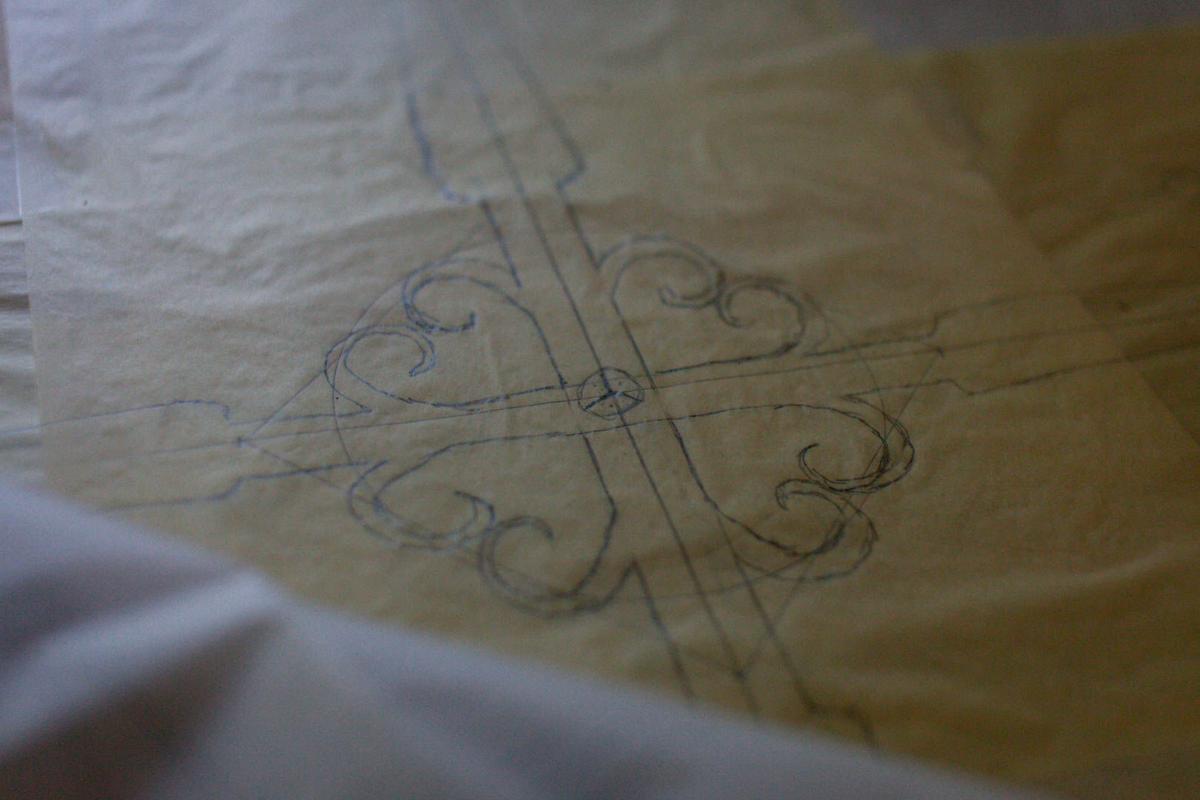 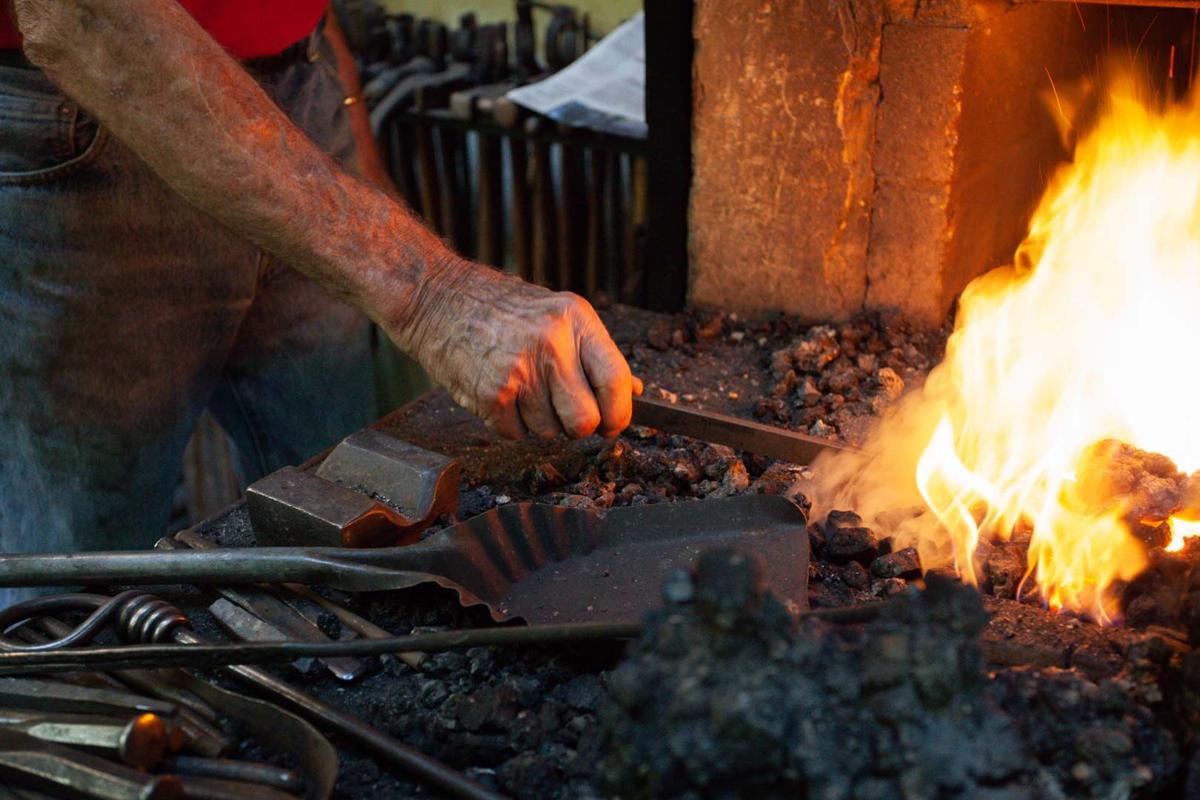 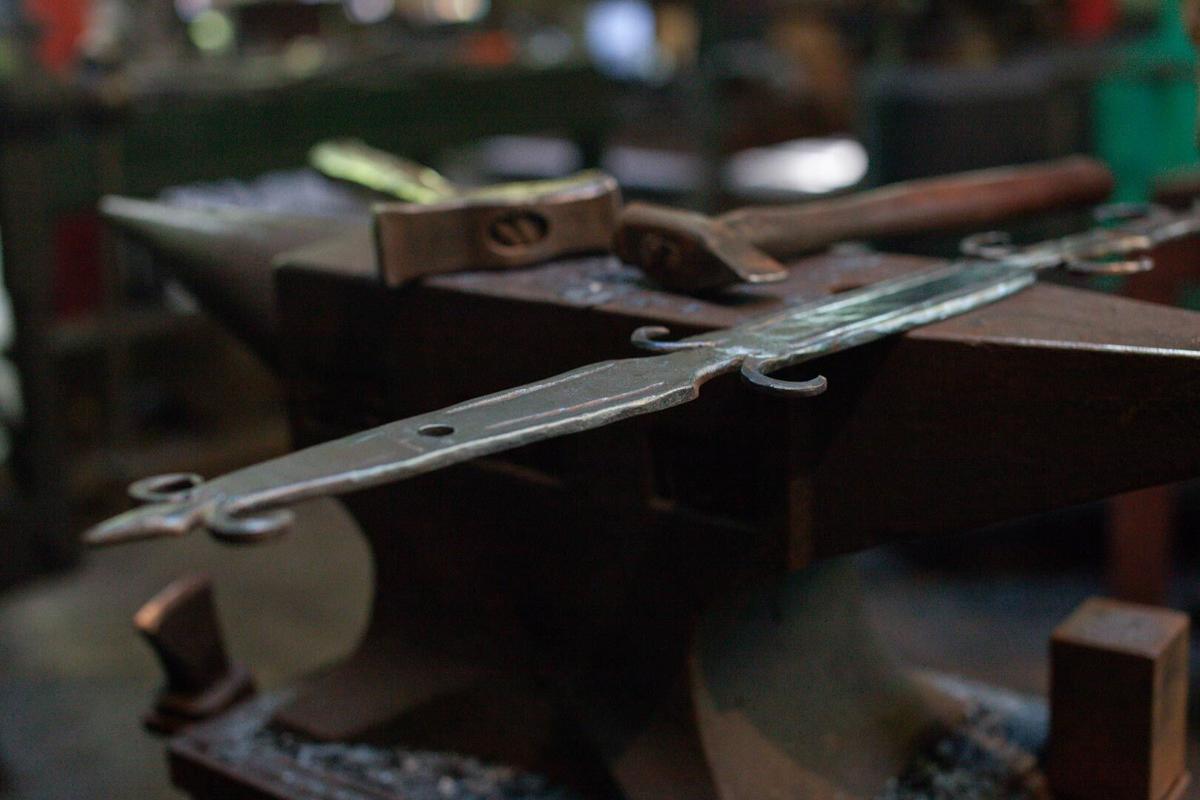 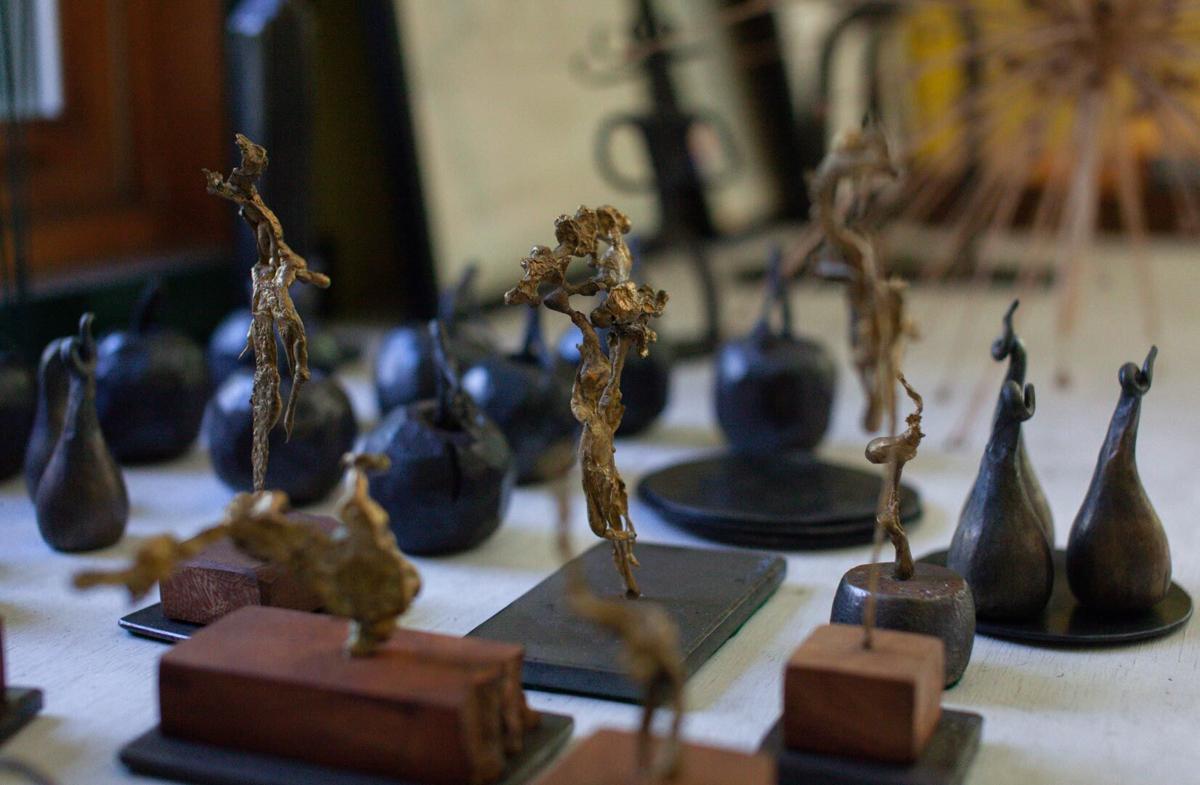 Other works by Nol Putnam 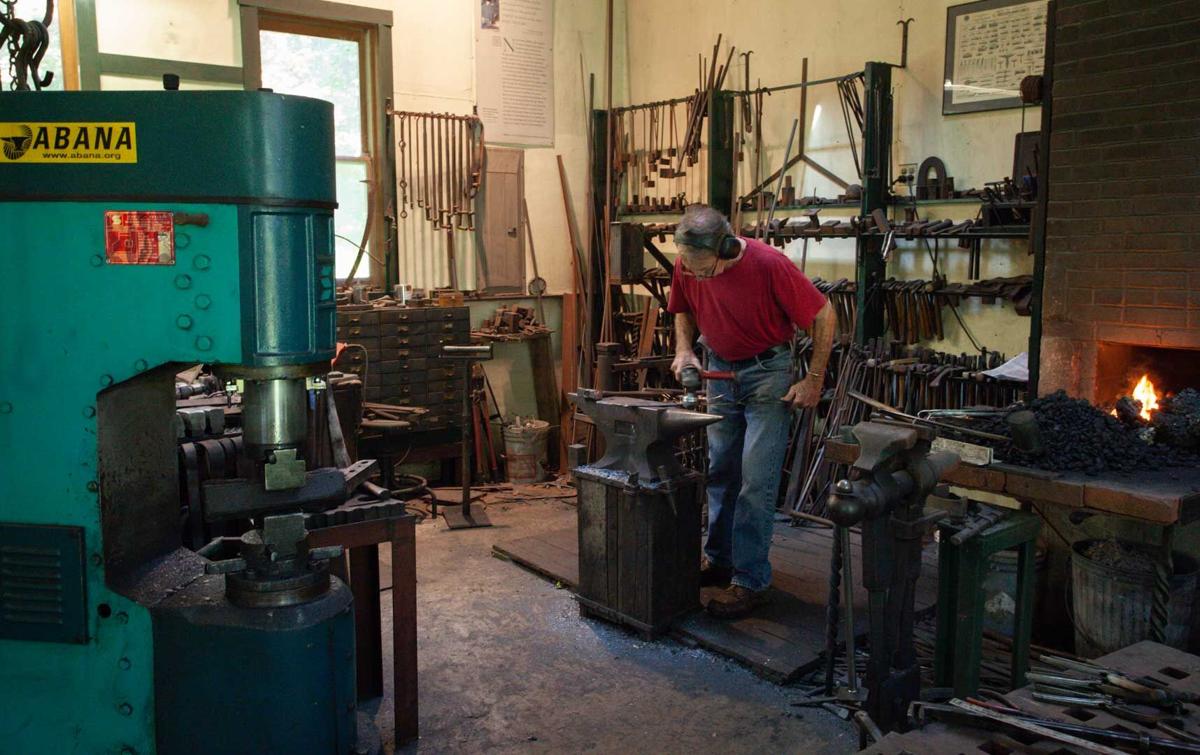 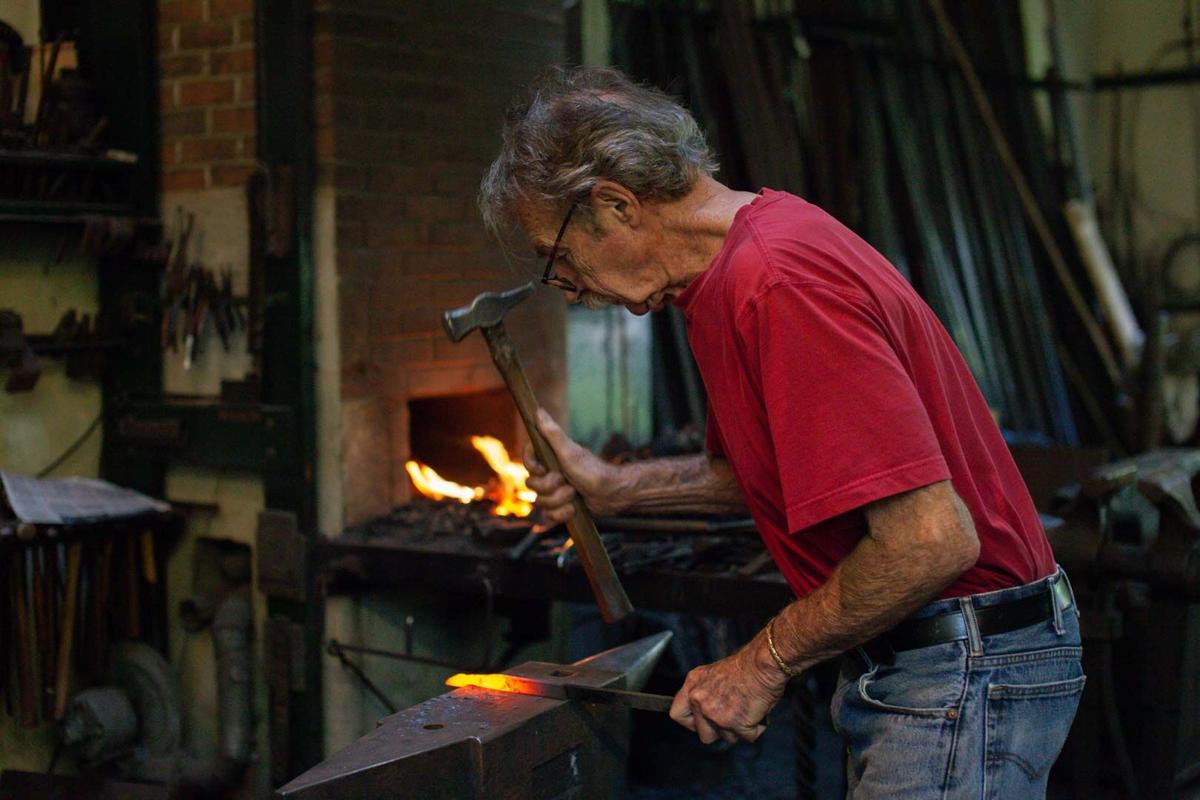 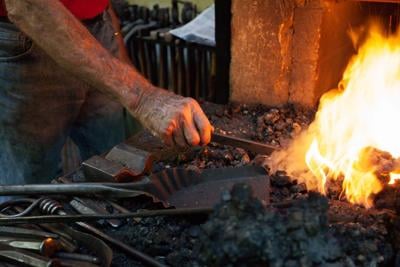 In the way he would plan in pencil a creation to be rendered in iron, Nol Putnam is sketching out his own transition.

Rappahannock County’s celebrated blacksmith, now 87, is preparing to leave his forge in Huntly, and perhaps, depart the county where many of his sculptures grace the landscape and where memories and friendships proliferate. For now, he is hard at work on what he has concluded will be his last commission: a piece of power and simplicity, consisting of three crosses to be housed in the Washington National Cathedral’s Columbarium, where he earlier installed what many consider his signature works, three commemorative gates.

Putnam has managed transitions before, and trusts his capacity to navigate the next one. At 39, having taught history to teenagers at Lenox School for Boys in the Berkshires, he moved to a farm in the area, and in addition to animal care and tapping maples, he began working — largely untrained — with anvils and hammers. He was delighted to discover the near magic of transforming black bars of metal into spirals, tendrils, leaves and apples.

He moved to Virginia a couple of years later, and after different living and working arrangements in Madison and The Plains, he participated in a 1976 street fair in Rappahannock, where he encountered local artist Jeannie Drevis, when smoke from his blacksmithing demonstration poured into her tent. A friendship with Drevis was born, and a larger relationship with the county and its artists. Putnam settled in Huntly; the current forge went up in 2001.

His vocation as a blacksmith was informed by dozens of books on the ancient art of ironwork, but more importantly by repeated exertions in the forge.

“From the first day, your body begins to build up the muscle memory,” he says. That helps him know from which angle and with how much force to strike the hot iron.

Six -to -eight hour days at the anvil generated a variety of works, increasingly complex over time, and buyers and commissions flowed in. “It took me a year to figure out what I was going to do,” he recalls, “and it took me five or six years to make an adequate living.” An earlier stint in the U.S. Army left him with a capacity for discipline, and a willingness to accept physical discomfort.

With commissions, Putnam would promise delivery without a date, sensing that a fixed deadline would lead to artistic compromises. For example, one of the three Columbarium gates for the Washington National Cathedral involves a cruciform design with four panels. Well into the project, Putnam inspected it and immediately felt a wave of dissatisfaction. “I ripped it out and started over, ” he says, happy with the work he eventually delivered. For each commission, he tried to learn something new and thus extend his range.

Whether the Putnam productions are functional (hooks, hinges, railings and banisters) or pure artistry, the work itself is invariably hot, loud, and physically battering.

“The obvious physical dangers are burns,” Putnam explains, “which can occur daily—  minor irritations from hot scale, burning coke, the early mistake of trying to catch a piece of falling red hot iron.”

Then, he adds,  there are longer-term perils of “looking daily into a white hot flame —glaucoma, inhibiting the retina to see truly. And hearing: the beat of hammer to anvil is nostalgic for many, usually present as background noise in old westerns. But the decibels of hammer to anvil, without being deadened by hot iron in between the two results inevitably in loss of hearing.” (Putnam protects his hearing as best he can with ear covers.)

The forge — a favored stop on the Rappahannock Fall Art Tour—  is equipped for the struggle. The 12-foot ceilings give space for moving around long iron bars. A jib crane assists with lifting the many ironworks that outweigh the ironworker. The floor is composed of four inches of reinforced concrete.

Daily sessions at the anvil over 48 years have toughened the sinews of Putnam’s hammering arm and even thickened his underlying bone structure. His Folger Gate at Washington National Cathedral is a burst of floral ornamentation, but the iron contains a hidden symmetry: it weighs 1,200 pounds and took about 150 workdays to assemble.

Putnam’s body is a mix of unusual strength and palpable fatigue. “I have an idea of doing things with my hands that are less taxing,” he confesses.

Putnam moves with caution around his property, where a path leads from his house through patches of trees and across a creek to the forge. His dog Jack— part Alaskan husky, part wolf, he claims— is a quietly watchful companion. Two flourishing fig trees are laden with fruit to be enjoyed in his kitchen with strong coffee and freshly baked scones. For Putnam, it’s been a good place to enjoy a good life.

History is marked by experiences of great artists who enjoyed breakthroughs despite, or perhaps because of, aging bodies. Matisse, disabled after a painful colon cancer surgery and subsequent complications, retired from painting canvases but discovered bold creations with colored paper scissored into irregular shapes and pasted onto large white surfaces. Georgia O’Keefe suffered from macular degeneration, and spent more time on ceramics, though she could still count on strong distance vision for mountain landscapes; her artistic productions continued through to the end of her 99 years. Rembrandt found age to be both a subject and a perspective from which to contemplate life’s mysteries; masterful as his early self-portraits are, his late-life self-portraits are mesmerizing, and widely considered the crowning works of a life in art.

Putnam enjoys pondering art after iron. “Obviously, I have an artist’s sensibility, and I have an artist’s way of thinking,” he says, “How do I continue to pursue that when my medium, and my skills to do that medium, is disappearing?” In the past, the germs of new ideas have floated in through dreams or slow walks with Jack, and he hopes they will continue that pattern.

He has exhumed, with surprised admiration, more than a hundred preparatory drawings associated with the iron sculptures and architectural components he produced in the forge. He knows they’re fine drawings, and he may compose others.

What is Foothills Forum?

The group has an agreement with Rappahannock Media, owner of the Rappahannock News, to present this series and other award-winning reporting projects. More at foothills-forum.org.

He also experiments with water colors. “I don’t think I’ll be a landscape painter; I may be an abstract painter,” he says, showing an iPhone image of red shapes dancing through space in an undulating line. The new image seems to echo earlier “lines in space” composed of iron (this phrase titles one of two books Putnam authored about his work.)

Leaving the forge for another creative platform is inevitable, given the nature of blacksmithing. But leaving the county — if that happens — will be a function of the special challenges Rappahannock presents for the over-eighty elderly. Hospitals and specialized care are essentially an hour’s drive away, working physicians are down to two individuals, and simple, one-floor houses are costly and rarely on the market. Real estate agents, likely busy with urban remote workers and recent retirees, “don’t return my calls,” Putnam says.

Putnam, who is divorced and single, manages solitude naturally. “Being an artist is a strange and often lonely occupation,” he reflects. “There is something that drives us, yet no one offers us a seat at the table. We have to fight our way there and sink or swim by the force or power of our work — regardless of medium.”

Comfortable solitude isn’t the same as isolation. Putnam says he is “blessed by many wonderful acquaintances, and a small handful of friends for whom I would give my life.”

On Sunday afternoons he assembles a group of seven friends, in different parts of the country, from diverse walks of life, to join in an email chat on topics of shared concern. Often, they discuss the state of the world.

He laments that “I’m 87, and for 56 of those years, we’ve been at war.” Scion of a large and prominent New England family, he notes that cousins held influential positions in Washington, and helped shape the U.S. war in Vietnam, a venture he wasn’t bashful about criticizing. The current political turmoil disturbs Putnam, who finds the contemporary debates shadowed by “big lies and magical thinking.”

With age, the chapters of Putnam’s life seem less disjointed. Virginia was something new for him, but he realizes the family history encompasses Virginia ancestors, including a great-great uncle who served in the Confederate Army. His life as a teacher, and later, an artist appear to be divergent, but as he ponders the two, he senses they come from the same root within himself.  Both involve putting something into the world that might change people. Some former students— now in their 70s — remain in touch.

Putnam’s three gates dominate the Columbarium at the crypt level of the Washington National Cathedral, below the enormous nave that appears on screens around the world when former presidents are eulogized or new presidents begin their terms in prayer. The area forms the western border of the Chapel of Joseph of Arimathea, which is dominated by a stunning mural by the Polish artist Jan Henryk de Rosen. Against a gold background, the painting depicts a group of ordinary looking people bearing the body of Jesus to a tomb following his execution. The mood is somber, but not morbid, and the faces, drawn from the painter’s various models, seem both down-to-earth and contemporary.

The Columbarium opposite the mural houses the remains of bishops and prominent musicians, but also those of some ordinary Americans who suffered extraordinary travails. Helen Keller is one. Another is Matthew Shepard, brutally murdered for his homosexuality, and later brought to the Cathedral for a safe repose.  On and around the altar are stacks of cards bearing the names of Americans who died of Covid but were deprived of any formal funeral or memorial because of lockdown protocols.

The three Putnam gates mark the passage to spaces dedicated to urns and burial vaults. The iron suggests permanence while the shapes of branches and leaves bring in a sense of seasons and change.

Putnam’s forge will eventually be dismembered, the machinery and tools sold off and repurposed. And Putnam will reimagine his art. Part of him has already traveled from Rappahannock County and settled for good into this quiet heart of a vast public space.

“There is always the scariness, the fear of creating from the depths of my mind,” Putnam admits, “revealing my innermost self for you to fuss over, pore over. In smithing, I am able to fudge that somewhat by retreating into the tried and true of fireplace tools, or hinges, or hooks. But ask me about my larger sculptures or some of my gates …. that comes close to the essence of me.”

By Tim Carrington — For Foothills Forum