Nantillois, a town north of Montfaucon, captured by the American forces, 1918 […] 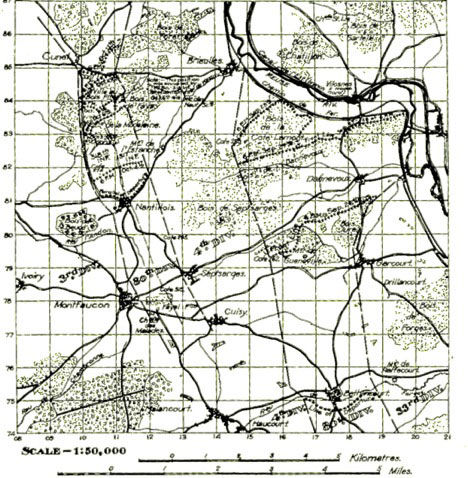 Jumping off positions and objectives of 4th, 80th, and 33rd Infantry Divisions in Meuse-Argonne Offensive on September 26, 1918. […] 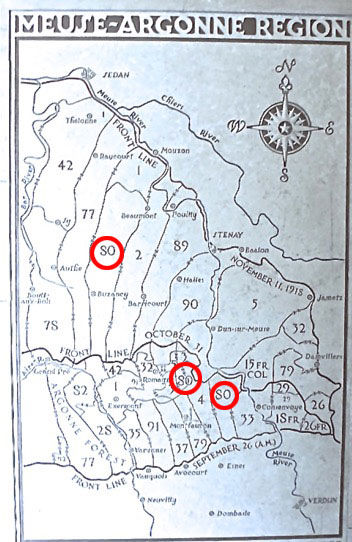 The number 80 indicates the location of the 80th Infantry Division with its 318th Infantry Regiment. Note its westward movement over time. […] 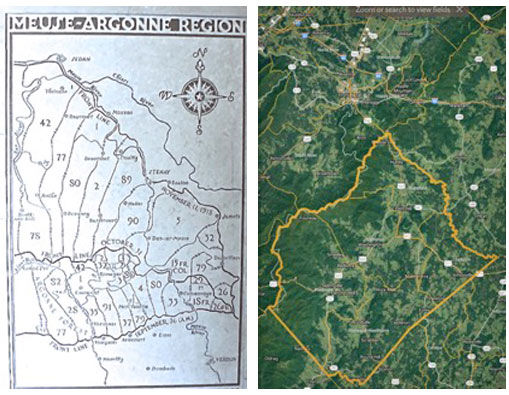 Comparison of the size of the Meuse-Argonne Offensive battlefield with a map of Rappahannock County extended a little north of Front Royal. […]

Nantillois, an example of the destructiveness of WW1. The 318th was located there at the start of October 1918. […] 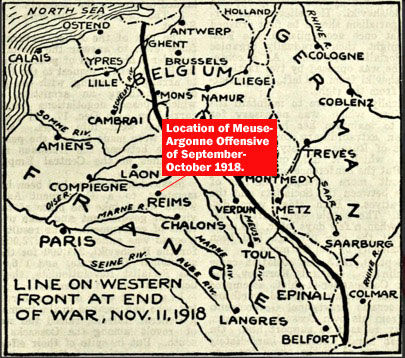 Location of Meuse-Argonne Battlefield in France in Sep-Nov 1918. Its size is about equal to Rappahannock County if extended to just north of Front Royal. […]

Nantillois, a town north of Montfaucon, captured by the American forces, 1918 […]

Jumping off positions and objectives of 4th, 80th, and 33rd Infantry Divisions in Meuse-Argonne Offensive on September 26, 1918. […]

The number 80 indicates the location of the 80th Infantry Division with its 318th Infantry Regiment. Note its westward movement over time. […]

Comparison of the size of the Meuse-Argonne Offensive battlefield with a map of Rappahannock County extended a little north of Front Royal. […]

Nantillois, an example of the destructiveness of WW1. The 318th was located there at the start of October 1918. […]

Location of Meuse-Argonne Battlefield in France in Sep-Nov 1918. Its size is about equal to Rappahannock County if extended to just north of Front Royal. […]

The Meuse-Argonne Offensive was the greatest American battle in World War One. It was located in France as shown on the map below.

The battle took place in an area about the size of Rappahannock County if the county were extended northward a little beyond Front Royal. Imagine 1.2 million Americans fighting in that area for 47 days in the fall of 1918. It was the single deadliest battle in US history, more deadly that any before or after, including WWII or beyond. Some 26,277 Americans were killed and 95,786 wounded in those 47 days. For the United States in WWI, there were 116,708 military deaths on all battlefields and 205,000 men were wounded. The following two maps show the size of this battlefield in comparison with a map Rappahannock County extended a bit north of Front Royal.

An old map of the Meuse-Argonne Region shows the areas where various Army Divisions were assigned as the battle developed. The 80th Infantry Division, shown by the number 80, moved from the east to west across the battlefield. But note also, that the 1st Infantry Division, with the first US troops to arrive in France in 1917, was given the honor of being on the front line at the very end of the war. The 29th Infantry Division is also shown on the map on the right, but was not engaged until early October 1918.

The Meuse-Argonne Offensive was part of a major drive by the British, French, and Americans in the fall of 1918, to cause the Germans to end the Great War, as World War One was then called. An Armistice was finally signed at the 11th hour of the 11th day of the 11th month of 1918. This event is still celebrated in the United States every November 11th, but it is now known as Veterans Day.

The Meuse-Argonne was the German’s most heavily defended area. It had been fought over for four years, the Germans winning. In the fall of 1918 it was a virtual wasteland of continuous German trenches, barbed wire entanglements, and concrete machine-gun emplacements. It had areas that, if invaded, were pre-targeted by German artillery. Especially devastating was German artillery fire from the heights on the eastern side of the Meuse River.

The jumping off point for U.S. troops on Thursday, September 26, 1918, was about 20 miles wide at the start. The overall objective was to cut two German railroad lines at the far end, about 33 miles away. Those railroads were handling German supplies and troop movements connecting the various German armies together. Severing them would significantly cripple the German war effort. That objective was eventually achieved.

Phase 1 – September 26th to October 3, 1918: The “History of the 318th Infantry Regiment” notes that at 11:30 p.m., on Wednesday, September 25, 1918, the night before the attack, a mostly French artillery bombardment began all along the Meuse-Argonne front. Some 3,700 guns kept up their bombardment on that moonlit night for six hours, until 5:30 a.m. Obviously, no one in the trenches got any sleep, nor did those behind them: men at ambulances, supply trucks, doctors and nurses, reserve troops. Most would go without sleep for the next 36 hours. At 5:30 a.m., September 26th, some 300,000 American troops in nine Infantry Divisions, including the 80th Infantry Division with men from Virginia, moved forward all along the 20-mile wide front. A friendly rolling artillery barrage paved their way. The 80th Infantry Division, with close to 25,000 men, had the 33rd Division on its right and the 4th Division on its left. It should also be remembered that the 80th Infantry Division had four regiments: the 317th, 318th, 319th, and 320th. We are concerned with only the 318th. The map below shows the layout of these Divisions, the general terrain, the small villages, and the lines of advance. Note on the left the 318th’s advance at various dates. Dashed lines show Divisional boundaries.

In moving forward through a dense fog at 5:30 a.m., the 80th Infantry Division had its 319th and 320th Infantry Regiments, side by side, in the lead, with the 318th Infantry Regiment, with its 3,272 men, held in reserve. The plan was to advance northward by 10 miles on the first day, then another 10 miles on the second day. Things went well despite barbed wire snares of 10 to 60 feet width that had to be cut through by wire cutters and that were deliberately pre-targeted by German gunfire. Troops also had to cross shell holes, deep ravines, and occasional woods, all subject to intense German machine gun and artillery fire.

At 7:30 a.m. on September 26, the 318th Infantry Regiment, still in reserve behind the jumping off line, and having had breakfast, was ordered to move across some ravines a little to the northwest, where they remained until 1 p.m. that afternoon. Next, they were ordered to move forward to a point just south of the town of Bethincourt (see bottom right of map). Because of the terrain, which was almost impassable due to four years of constant warfare, the infantry companies of the 318th straggled in from 5 p.m. onward. This move to the left was to aid the 4th and 79th Infantry Divisions, which were experiencing difficulty taking German-held MontFaucon, a steep-sided 500-foot butte.

At 5:15 p.m., another order directed the 318th to the town of Bethincourt itself. Arriving there at 6 p.m. yet another order sent them onward to a town called Cuisy (see near bottom middle of map) where they trickled in from a little after midnight until 3 a.m. in the pitch dark of a cold and rainy night. It was now the very early hours of Friday, Sept. 27, 1918. They spent the rest of the night in a ravine trying to get some rest. They had marched some 11 miles after a previous almost sleepless night and had only one real meal, breakfast. During this foray into No Man’s Land, German warplanes were active, strafing the line of movement of the 318th Infantry Regiment, but luckily the 318th escaped with only a few casualties.

The 318th spent the next two days and nights (Friday, Sept. 27, and Saturday, Sept. 28) at Cuisy. During these two days, the town of Cuisy was under almost continuous German shellfire and the 318th Infantry Regiment received a number of casualties. More orders were subsequently received and rescinded, until the 318th was ordered at 2:30 p.m. on Saturday, Sept. 28, in a pouring rain, to a place called Septsarges (above Cuisy on map) to take part in an attack to be launched at 5:30 a.m. on the morning of Sunday, Sept. 29, 1918. The attack began, but heavy German artillery and machine gun fire prevented much progress. Over the next few days other attacks were initiated, but met a similar fate, and many in the 318th were killed or wounded. At 8 a.m. on October 3rd, the 318th was ordered to march three miles to a trench system southeast of Cuisy. There, a plan was made to participate in an attack on October 4th, at 5:30 a.m., on Nantillois, six miles to the northwest. These attacks on October 4th and 5th were again stymied by heavy German artillery and machine gun fire. Positions were then consolidated and the 318th was relieved by 319th. The 318th then moved to southeast of Cuisy at 5 a.m., Oct. 7, “mentally and physically exhausted, and, due to the numerous casualties among the officers and non-commissioned officers, rather badly disorganized.”

A mix of clouds and sun early, then becoming cloudy later in the day. High 44F. Winds light and variable.

Rain showers in the morning will evolve into a more steady rain in the afternoon. High 44F. Winds light and variable. Chance of rain 80%.