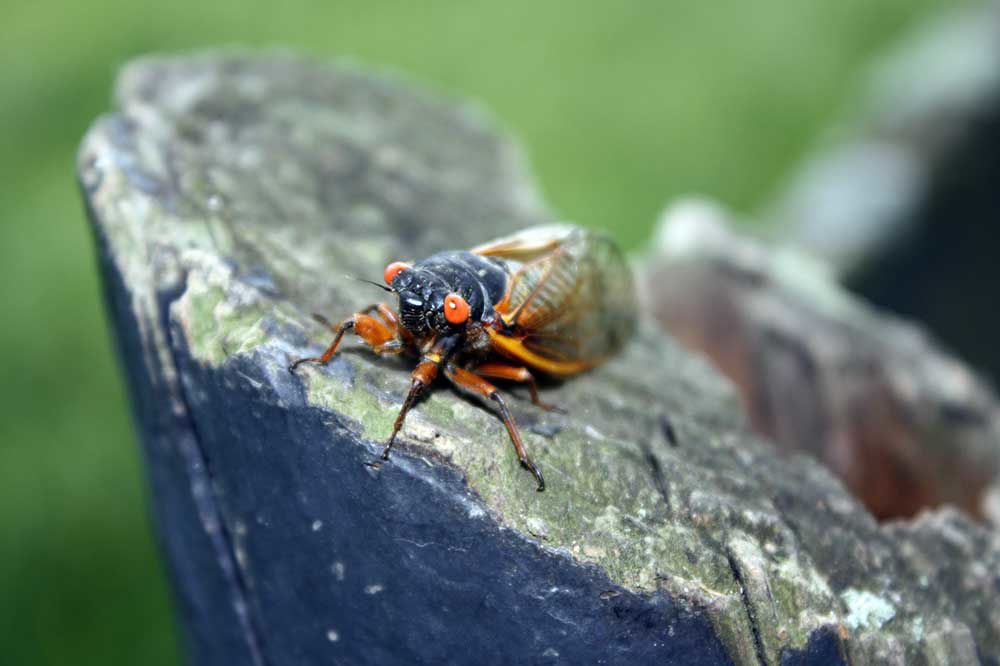 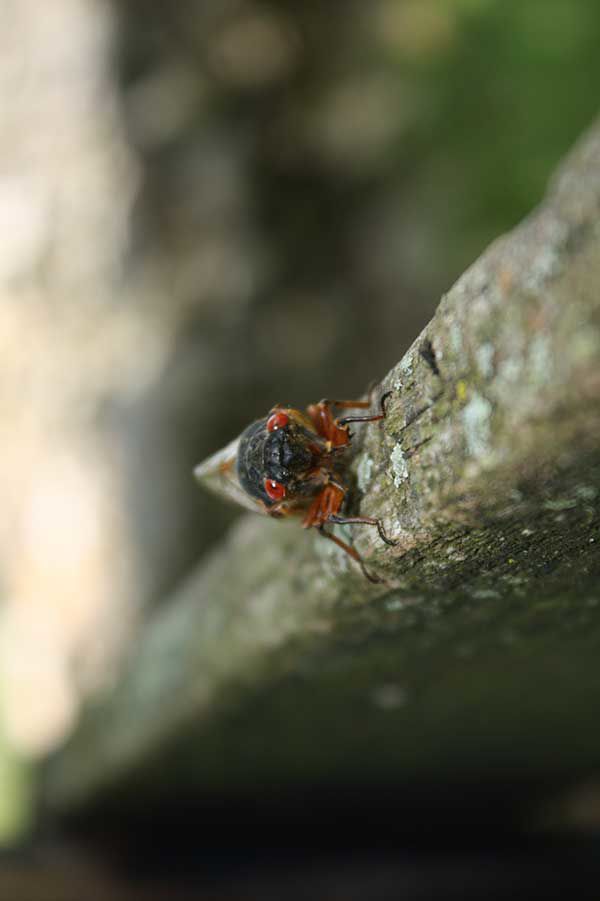 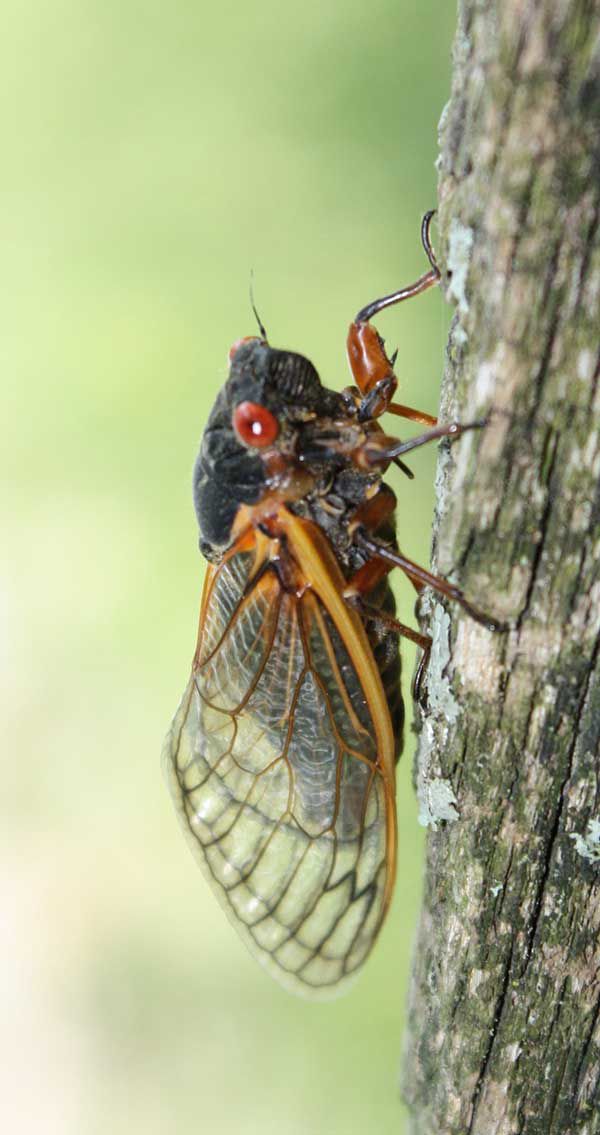 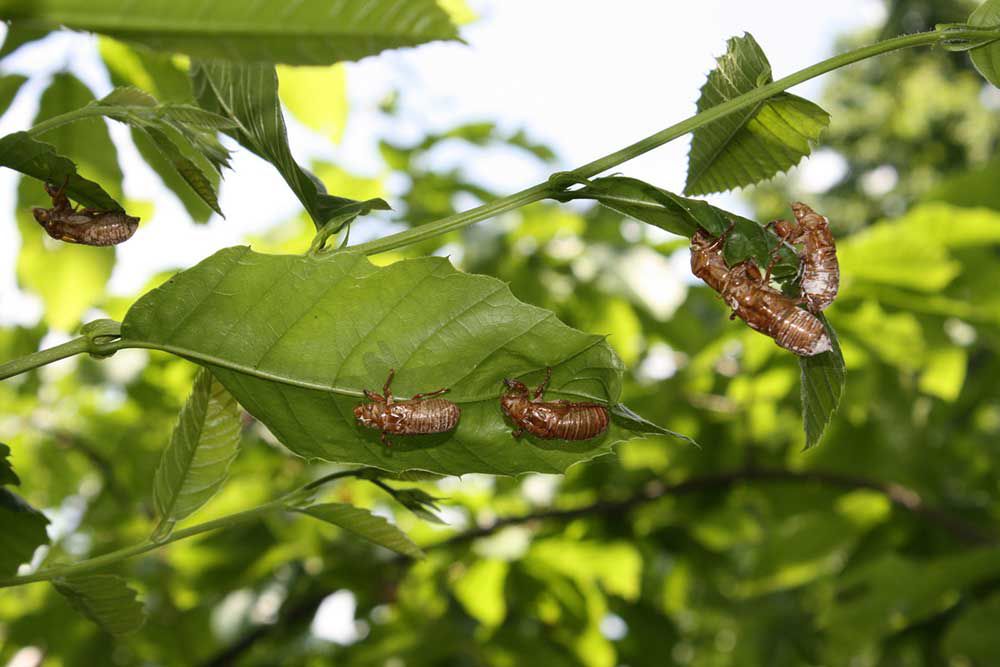 I first heard reports of one or two appearing of them here and there or leaving behind proof of their emergence – holes in the ground under trees and strange empty exoskeletons everywhere. Then I saw one at a local restaurant in Flint Hill and heard rumors of masses of them taking over the rest stop along I-66 near Manassas. Finally, up here in the hollow, I heard the sound that signaled the event I’ve eagerly awaited – the mass emergence of Magicicada Brood II!

Brood II, which consists of three species of periodical cicadas (the genus Magicicada), emerges every 17 years, and arrived later in the hollow than most places in the county. That’s not surprising, considering the hollow is dark and cool, and the emergence is apparently triggered by the soil temperature exceeding 63 degrees.

This morning, on Memorial Day, the brood started humming down at the bottom of the mountain. The sound was fairly low pitched and constant, not like the higher-pitched rising and falling chorus of katydids, which are nocturnal. Cicadas are diurnal – humming only during the day.

I was trying to figure out what the sound reminded me of and it finally hit me: the flying saucers in the 1950s B-horror movies. Those movies scared the bejesus out of me when I was a little kid. The themes echoed the main fears of the Cold War era in which they were made – nuclear bombs and radiation and a “Commie” takeover. Hollywood turned those fears into animals made gargantuan from exposure to radiation and into space aliens that took over your body. If any bug in Virginia looks huge and alien, it’s a Magicicada. And, from the sound, it wouldn’t be hard to imagine them arriving by flying saucer.

I even remember one movie in which people disappeared into holes in the ground created by aliens, and for the last few weeks, I’d heard several reports of mysterious holes here in Rappahannock, some with above-ground structures that look like turrets or chimneys. Of course, these are very small holes and much too small to swallow a human.

Magicicada.org, a great website for information on the bugs, explains that these holes are the last homes of the cicada nymphs (larva). They go through five stages underground in such burrows, feeding off the juices of tree roots, as they grow from approximately the size of a small ant to nearly the size of an adult cicada.

To prepare for their final state, the nymphs emerge out of the ground after dark, often in unison, and aim for the tree whose roots they’ve been feeding off and crawl up it, although they’ll also crawl up pretty much any vertical surface they come to; there they molt one final time. The nymph’s exoskeleton splits open along the top, and the adult cicada, now with wings, emerges and leaves the shell of the nymph’s exoskeleton behind.

According to Magicicada.org, the newly emerged adult cicadas are light colored and soft. They spend roughly four to six days as “teneral” adults hardening their exoskeletons, which may take longer in cool weather. After this period of maturation is complete, the adult males start humming to aggregate both males and females to breed.

The females then lay eggs in tender tree stems, which they split open with their ovipositors. Within six weeks of their emergence, the adults die. When the eggs hatch, the tiny nymphs that emerge head down the host tree and into the ground, restarting the 17-year cycle.

I decided to do some spring cleaning – not in my house, which is hopeless, but on my blog, Wild Ideas in the Blue Ridge. I hadn’t posted anything in a year, but it now has a new addition – a nature journal with short reports and photos of nature’s progress. My brief inaugural post for this year has a slide show of some of the critters mentioned in this column (including more cicada photos) and some other signs of spring.

Cicadas – both the periodical species and the larger “dogday” cicadas that appear every year but later and in fewer numbers – are an important part of our native ecosystems. The adults don’t eat and do relatively little damage. Being nonaggressive, defenseless and hyperfocused on breeding, they easily fall prey to predators, which become glutted on the protein-rich largesse, leaving large numbers of cicadas to reproduce. Rappahannock residents have been reporting their cats and dogs gleefully taking advantage of this banquet. While eating too much of anything can lead to indigestion, pet owners could see this as a way to lower their pet-food bills for a few weeks.

Several chicken owners have also reported that their poultry love eating the bugs but are afraid to go outside their pens to hunt them, likely because of the loud humming. Chickens, and wildlife that have not encountered the bug before because of the long intervals between its emergences (hence the evolution of the periodical strategy), may warm up to it once they’ve realized its food worthiness. In any case, the carcasses of millions of cicadas will return nutrients to the very trees on which they had fed as nymphs.

Animals are not the only species dining on cicadas. Discussions of recipes are now a regular feature of the media, mostly delivered with an expression of distaste. However, from what I’ve heard from those who have eaten cicadas, this aversion to eating insects is more about culture than taste. Some people who have dined on them have reported that the bugs are “quite tasty” and “meaty.”

I’ve licked a banana slug on a dare from a park ranger in the Northwest, to test the numbing agent in the slime (used by Native Americans’ to treat toothaches). And when I was a tiny kid in Germany, I enjoyed eating fresh sea snails. So, I’m willing to give cicadas a try if someone else is willing to cook some up. Anybody?