OK
You are the owner of this article.
Edit Article Add New Article
You have permission to edit this article.
Edit
Home
News
Events
Features
Obituaries
Opinion
Multimedia
Announcements
E-edition
Classifieds
The Guide
1 of 2 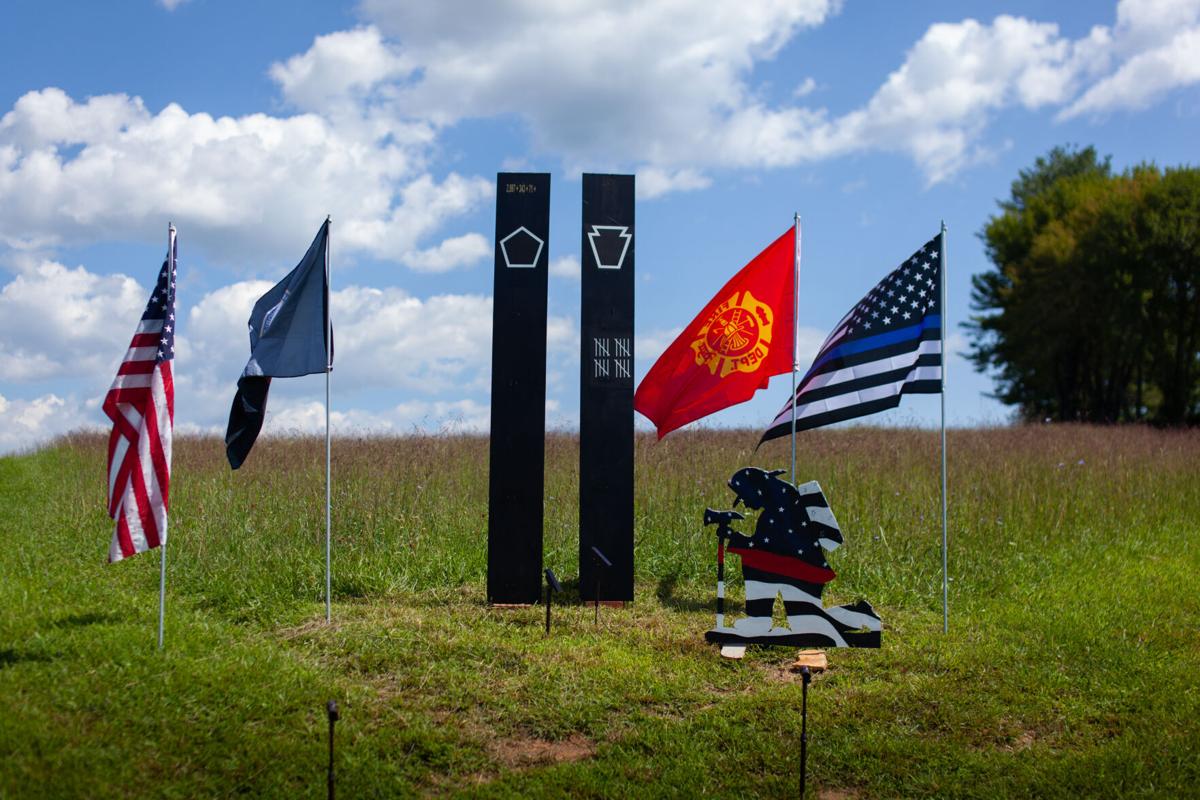 A September 11 memorial at the Silo at Sperryville this week. 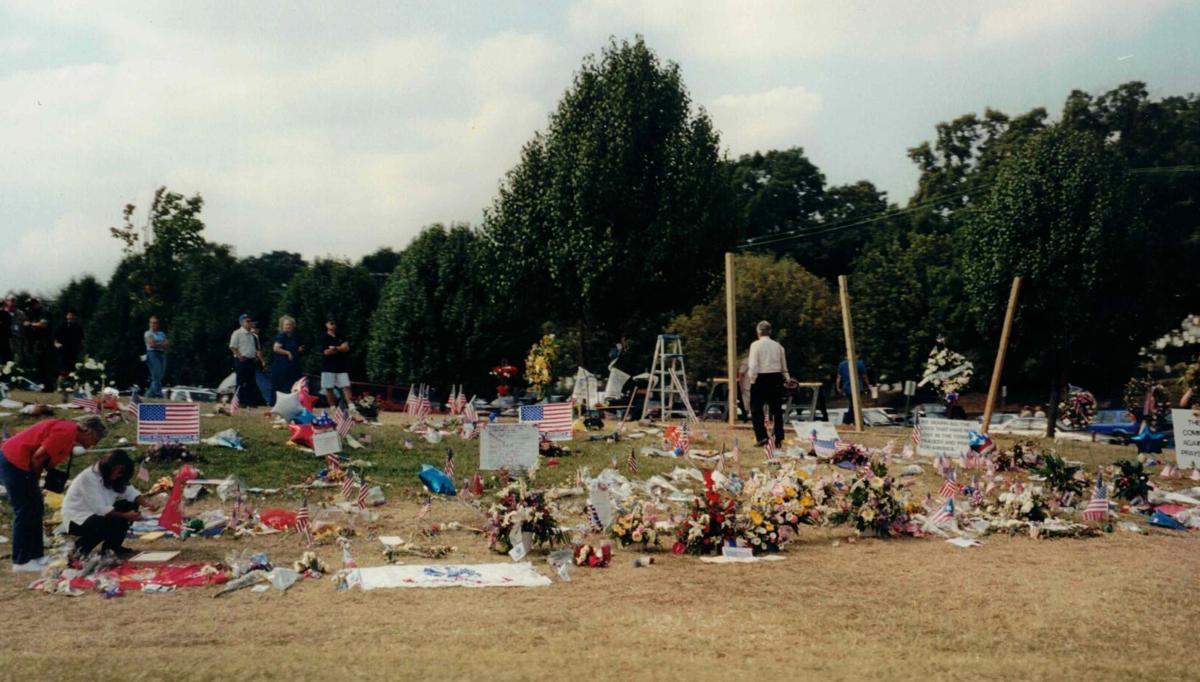 Like most Americans on Sept. 11, 2001, Rappahannock resident Kit Johnston was glued to her TV screen with a phone and radio at arms reach. She was living in Arlington County at the time, only three miles from the Pentagon, and her former husband was in lockdown in a building next to the U.S. Department of State.

Johnston, 70, said she was living that day moment by moment, as she kept tabs on her children who were in school and learned of friends in neighboring Washington, D.C., and far away New York City who were all experiencing tragic losses.

This year marks the 20th anniversary of the attacks when Al Qaeda terrorists hijacked commercial airplanes and flew them into the World Trade Center in New York City and the Pentagon in D.C. People across the country felt the shock of the tragedy and watched the day play out on news networks.

Johnston said the events on that day ultimately led to the demise of her marriage after she wanted to invest in an emergency shelter for her family in the basement, and her husband wasn’t on board.

She said he cut a vital cord of trust in their relationship for brushing away her fears and concerns. They divorced in 2004, and Johnston moved to Rappahannock County in an effort to separate herself from an area where she felt so vulnerable.

“It just stood as a black moment between us that never went away, and I guess neither one of us really fought too hard to make it go away,” Johnston said.

Through the eyes of a child

Nicole Lee was eight years old and living in Culpeper on 9/11. She said she can remember that day so clearly because she spent it in a hospital while her mother was in labor with her younger brother.

Lee said when the first plane struck one of the towers, it was plastered all over the TVs in the hospital, and she remembers watching the news with her 7-year-old sister while her grandmother cried.

She said that the overall mood of the hospital was frantic and remembers the reporters on TV looking frightened, but she could tell the adults were trying to keep their composure. Lee’s brother was born around 5 p.m., but her family stuck around for several more hours since traffic was so bad.

“I'm an eight-year-old kid, you know, my sister wasn't aware of what's going on ... But I kind of got the gist of what was happening. And then later that evening, my brother was born. So while it was a sad and tragic event, I got some type of happiness,” Lee said.

When Lee turned 15, she became a fire and rescue volunteer, and she said a motivation for her was the bravery she saw in 9/11 first responders. She volunteered for 13 years, first in Culpeper then in Flint Hill, and is currently taking a break while she’s pregnant with her third child.

Lee is also pursuing a bachelor’s degree online in criminal justice while being a full-time mom, and said her goal is to eventually work in investigating crimes against children.

“I'm always trying to help someone, and I always try to lend a helping hand when I can,” Lee said. “Obviously when I'm pregnant, I'm limited on hands. But [9/11 has shown] me that tomorrow is not promised, sometimes today's not even promised. So be thankful for what you have now.”

Deborah Flinchum was teaching first grade at Rappahannock County Elementary School on 9/11, and said she spent the day keeping her emotions under control and facilitating a stable school day for the kids.

“That's what teachers do,” Flinchum said. “I felt it was my duty to make the children feel safe, and one way to do that is just to keep a regular schedule going.”

She first learned something was wrong when she brought the kids into the cafeteria for snack time and saw the cafeteria workers huddled around a radio. Her first emotion was disbelief, and as the news slowly began to sink in, she said the rest of the day felt surreal.

She had a student whose mother worked at the Pentagon, and when she came to pick up her daughter, everyone in the office started crying and hugging each other out of relief.

“At lunchtime, when the children went to art or music or something, I went into the library because [they] had the TV on in the back for us to keep up with what was going on. And every chance I had, I would go back and check,” she said.

“I've lived in Rappahannock all my life, and back when I was little, Rappahannock was an easy going, safe county to live in,” Flinchum said. “Not many people, everybody knew everybody. And so I grew up that way, and my view of the world, I guess, was very narrow compared to some people who would live in the city and have more experience with different types of people.”

Flinchum said that because of the age of her students, she did not try to explain what was happening. But for teachers in the middle and high schools, it wasn’t possible to shelter the students from the news.

Pete Pazmino, a resident of Chester Gap, was teaching 10th grade English at Liberty High School in Fauquier County when the attacks began. He said an announcement came on over the intercom that let everyone know there was an attack in New York, and the administration left it up to the teachers to decide if they wanted to turn the news on for their students.

Pazmino said all they did for the rest of the day was watch the news. He had students whose parents were working in D.C. and at the Pentagon, and Pazmino said his clearest memory of the day was being in a classroom with kids who were all scared and riveted by the television, feeling the same things as the adults.

He said he had students crying and asking to excuse themselves, and the administration let some of the older students with cars sign themselves out to go home.

“There were kids in the hall just going crazy, you know, not understanding what's happening, and of course, none of the teachers understood what was happening either,” Pazmino said. “So nobody knows what to say or think. That's what we did all day, we just watched television.”

John Lesinski, a former member of the Rappahannock County Board of Supervisors and Marine colonel, was at his office job in Tysons Corner that day.

“We didn't have any TV,” Lesinksi said. “We didn't have anything other than the radio. So I was not watching this in real time as it happened ... We were listening to reports on the radio and there was almost a sense of disbelief that something like this could happen until I went to the corner of my office in Tysons Corner and looked out east and could actually see the smoke coming from the Pentagon.”

Lesinski, 62, served four years of active duty in the Marines and 22 years in the reserve before retiring from the military in 2006. He has been serving as the chair of the Virginia Veteran Services Foundation Board since 2014.

A month after the attacks, Lesinski took his two children, who were around ages of 12 and 15, and drove by the rubble that was left behind after the attack on the Pentagon, which he said was still smoldering.

Lesinski’s children grew up in Arlington, so he said he thought it was important for them to see firsthand what had happened to help them process the tragedy.

“This was something that was pretty close to where they had been growing up and where I lived, and so it was like, look, let's go down here and take a look at this,” Lesinski said. “I think it's going to be helpful for all of us. And maybe it was, I hope it was helpful as far as being able to process the whole thing, too. Because that was a big part of it — how do you process a catastrophic event?”

In response to the terrorist attacks, Republican then-President George W. Bush sent U.S. troops to invade Afghanistan, starting what became known to history as the War on Terror. Lesinski said that for him, the war began in October 1983 when terrorists bombed U.S. and French armed forces in Beirut, Lebanon during a peacekeeping mission that killed 299 soldiers.

Lesinski was stationed at Camp Lejeune in Jacksonville, North Carolina, the same base that housed the unit that was in the barracks in Beirut during the attack.

“I was there when they came back from Beirut,” he said. “So that, to me, was a very visceral experience in that I was, you know, I was there. I don't want to say that event was forgotten, but it's not as much in the national mindset as 9/11. But 9/11 in many ways was an outgrowth or an extension of what had been happening globally.”

Lesinski said that 12 years ago, one of his good friends died by suicide after being based in Iraq and Afghanistan. He said that was a defining moment for him in his decision to dedicate his time assisting veterans in need.

According to a 2020 report from the U.S. Department of Veteran Affairs, in 2018, the average number of veterans who died by suicide was 17.6. In each year since 2008, the number of veteran suicides has exceeded 6,300.

In Lesinski’s position as the chair of the Virginia Veteran Services Foundation Board, he works on homelessness and suicide prevention programs, and emphasized the need for more mental health care resources to veterans across the country. He added that in many cases, veterans are unaware that programs exist to help them.

If you’re a veteran who is struggling, the Virginia Veteran and Family Support Program can help connect you and your family with appropriate resources. Visit dvs.virginia.gov to learn more.