Log In Sign Up
You are the owner of this article.
Edit Article Add New Article
You have permission to edit this article.
Edit
Home
News
Events
Features
Obituaries
Opinion
Multimedia
Announcements
E-edition
Classifieds
The Guide 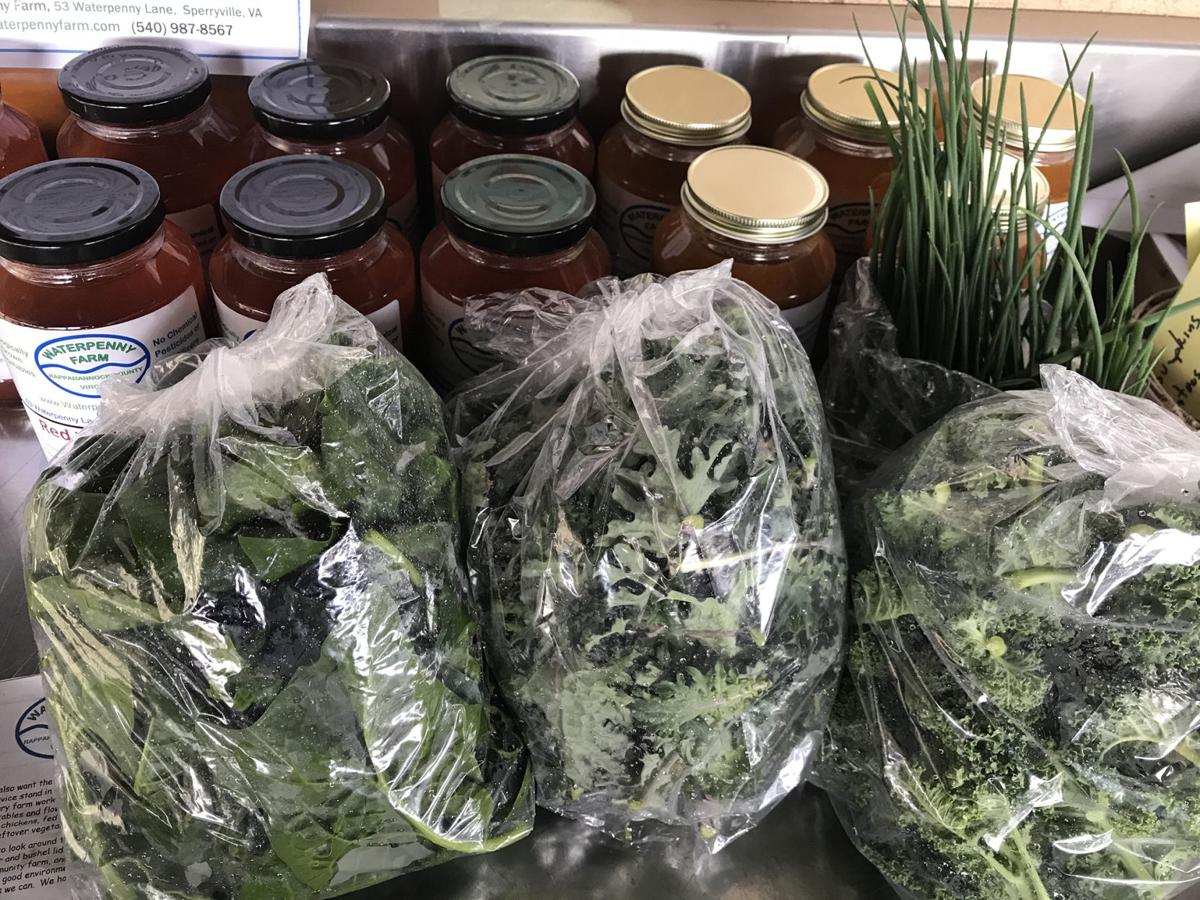 Pre-bagged greens and homemade canned tomato soup are both now available at the Waterpenny Farm store in Sperryville. 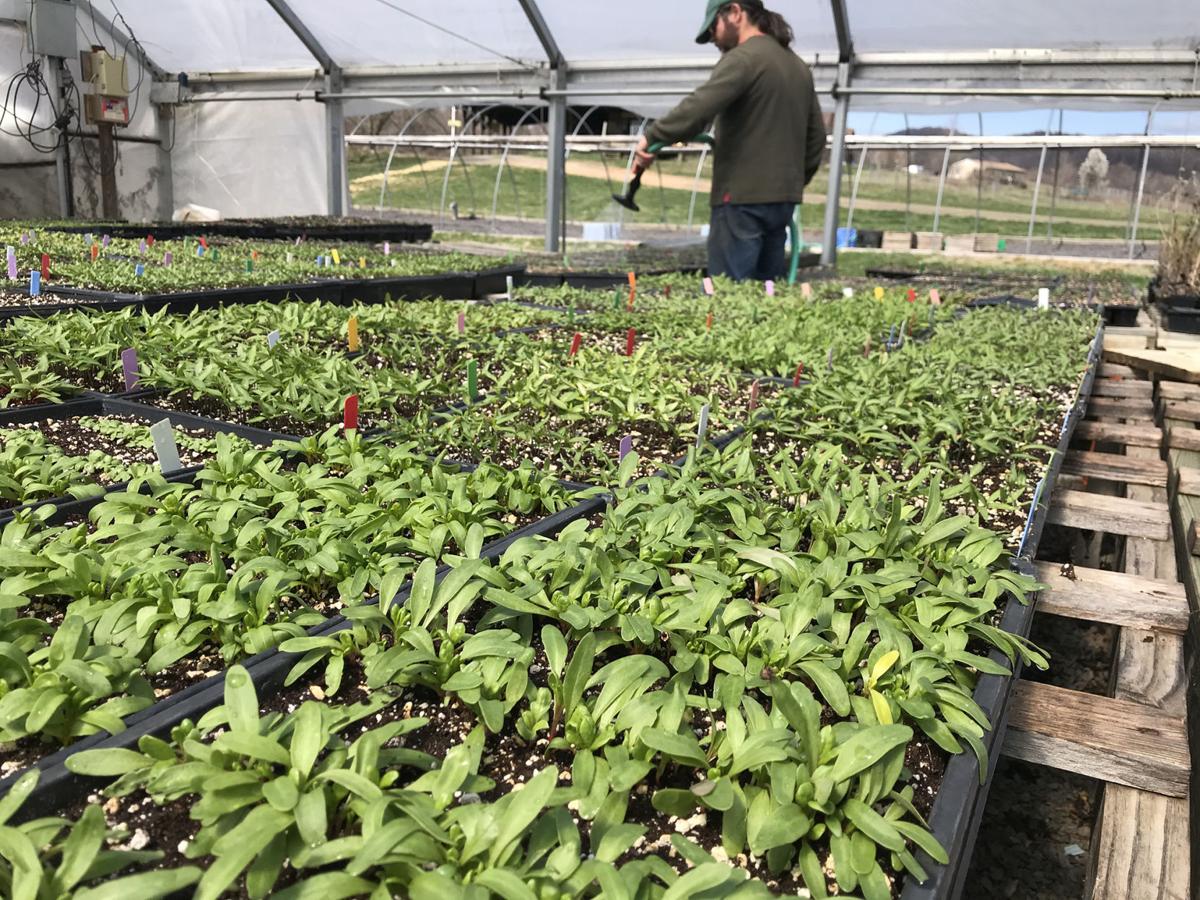 Plants being watered at the Waterpenny Farm greenhouse.

Farmers in Rappahannock County are working to get food to residents and altering their operations to address new challenges that have arisen in the wake of the COVID-19 outbreak.

Chief among them: Virginia starting on Tuesday officially closed all farmers markets, not to mention all dining and congregation areas in restaurants, dining establishments, food courts, breweries, microbreweries, distilleries, wineries, and tasting rooms. That said, all can continue to offer delivery and take-out services.

That means having to rethink and adapt the way they’ve typically done business while also responding to inquiries and working to keep customers and staff safe.

“Many of them are doing their best at this point to figure out Plan B,” said Laurie Smith, executive director of the Rappahannock County Farm Tour.

Among the 15 farms she’s been in contact with, all those that sell food regularly are still doing so in some capacity. Several are pre-bagging produce and moving toward accepting online pre-orders.

Many farmers are also seeing stronger sales than usual this time of year due to increased demand. Produce is limited given the growing season, but Rachel Bynum at Waterpenny Farm said they’re selling more spinach than ever for March.

They’re also seeing more people sign up for their CSA, a subscription service where produce is delivered from the farm to pick-up points throughout the harvest season. That will start in June. “It’s a great option for people who are trying to avoid big-type places and want to know where their food is from,” Bynum said.

On Friday, the Farm at Sunnyside launched an online store for customers in Rappahannock to pick up pre-bagged, pre-paid produce at the Sperryville Corner Store on Wednesday afternoons.

“All of this is very new — so we'll have to see how it goes and continually re-evaluate,” Stacey Carlberg, the farm manager, wrote in an email. “The farm is not open for pick-ups or visits, as we are trying to focus on growing food and limit our time re-sanitizing areas and interacting with folks.”

One of the challenges Smith says she’s hearing from farmers is figuring out how to get food to people the cleanest, safest and best way possible.

“Everyone is just reassessing,” she noted. And working on re-invention.

Farms that had restaurant clients, for instance, will be affected by those businesses closing or moving to online ordering only. Many farms also rely on farmers’ markets for a large portion of their sales.

Mike Sands at Bean Hollow Grassfed said they’re doing volunteer work with the pantry too and considering additional outreach, such as matching donations from customers who buy in bulk.

He’s cut prices slightly on products like ground beef while raising them on higher priced cuts — so clients with more resources can subsidize clients with lower capacity, he said.

Sands, who sells beef, lamb and pork raised on his farm, said he’s also seen an increase in sales, in large part, he believes, because most major grocery stores are out of meat. They’re also doing more promotion than usual and have seen more sales from new customers.

With the shortage of supplies in major grocery stores exposing fragilities in supply chains that depend on shipping, packing, trucking and warehousing, Smith believes this is an opportunity for local farms to shine.

“My hope is that people will more value the local food system because of this,” Smith said. “If things were really shut down, those local farms might be your only hope for food.”

For Sands, as with many farmers, the biggest challenge is managing uncertainty.

“What’s going to happen and how do you plan for that? Should I be trying to slaughter more animals, which would mean slaughtering them at a slightly lower rate which is not as profitable, or is demand going to slow?” he asked.

“I’m hoping we can make this more seamless and more like a system that creates a lot of trust,” said Bynum. “We can do that, we’re small and agile.”

BOR President Theresa Wood said several people she spoke with are trying to quickly and creatively change their business models to respond to current needs. Debbie Donehey at Griffin Tavern, for example, worked with Sysco to get deliveries of things that are difficult to find in grocery stores, such as meat and paper products, and is now doing limited online grocery ordering.

People can go to their website (https://griffintavern.com/) choose from food, retail, grocery or beverage, shop pay and come to the restaurant for curbside pickup, said Donehey, who is particularly excited about making their shepherd’s pie available frozen.

“We’re trying to find a way to help the community and keep cash flow going until the virus decides to move on,” she said.

Online tools are going to be an answer for many. Bynum said Waterpenny has hired a company to put its plants and produce in an online store so they can manage pre-orders. The farm’s annual plant sale, originally scheduled for April and a big burst of income, may turn to pre-orders.

“The best thing is just continue to purchase,” said Sands. “Most businesses, their single biggest fear is losing sales. They’ve built the whole business on some predictive sales base, and that’s the biggest variable.”

Smith said she thinks local farms have the ability to roll with the punches.

“I think the farms that are surviving at this point and turning a profit and actually making a living off the land, they have been creative to get to that point, and it’s a lot of smart people and farmers have learned to roll with the punches throughout the ages,” she said. “Many of them are just working on reinvesting themselves right now.”

Here’s a brief overview from Laurie Smith of what farms are offering. If a farm isn’t listed below and has updates to share, please write to editor@rappnews.com. For contact information visit the Rappahannock Farm Tour’s website: http://rappfarmtour.org/2019-farms/

Belle Meade Farm: Email or call. We have meat, eggs, fresh veggies from the garden, including cooking greens and salad greens.

Bean Hollow Grassfed: We have freezers full of Grassfed Beef, Grassfed Lamb and Pastured Pork as well as eggs. You can check out prices online: https://www.beanhollowgrassfed.com/market

Britta Johnston at Mountain Vista Farm: Offering a serene spot for people to get away and breathe, while surrounded by beautiful horses and hills. Anyone interested needs to contact the farm in advance to arrange a time.

The Farm at Sunnyside: Online farm store launched. Orders in by 7 a.m. Tuesday for pick-up at the Sperryville Corner Store Wednesday afternoon. To respect social distancing, orders placed by those whose last name is A-L will pick up Wednesdays from noon to 3 p.m., last names from M-Z will pick up Wednesday from 3 p.m. to 6 p.m. Minimum $18: https://store.thefarmatsunnyside.com/

Waterpenny Farm: Greens are growing well and we will have more in every day. And we have plenty of tomato soup, canned last year from our tomatoes, garlic, and basil as well. Check Waterpenny’s website for access and CSA information.

Editor’s note: Local farmers not mentioned in this article who are responding to the COVID-19 outbreak and have valuable news to share with the community please contact editor@rappnews.com

This story is produced with support from Foothills Forum, a nonpartisan, nonprofit that supports research and reporting about Rappahannock County matters.

Supporting our local news coverage: In this time of national emergency, we endeavor to continue bringing you critical local news. Any donation can help ensure that we have the ability to do so.

Hats off to Donehey and Sysco

Griffin Tavern received a gift yesterday — a pretty substantial one at that — from Sysco Virginia.