Exactly four years to the month of its filing in September 2016, Judge Designate Jeffrey W. Parker of the Twentieth Judicial Circuit of Virginia has awarded attorney David Konick $6,250 of the $132,769.46 in attorney’s fees he claims he’s owed in representing Marian Bragg v. The Board of Supervisors of Rappahannock County.

“There were numerous issues upon which the Petitioner [Bragg] failed to prevail, including but not limited to disqualification of Respondents' co-counsel (2 times), landfill improvements, personal liability of Board members and others,” observed Judge Parker in an August 27, 2020 letter to Konick, Rappahannock County Attorney Arthur L. Goff, and Washington private attorney Michael T. Brown, the latter two representing the county government and taxpayers.

“Therefore, the Court will grant the Petitioner 25 hours in attorney's fees at his going rate of $250/hour (which the Court finds reasonable) totaling $6,250.00 plus $4.00 in costs equaling $6,254.00 to be paid within 30 days from entry of the Order, less $200.00 in unpaid discovery charges. The Court directs Respondents counsel to prepare the appropriate Order.”

As reported late last month by the Rappahannock News, Bragg, a llama farmer previously from Culpeper County who moved her operation to Harris Hollow, charged that the Rappahannock County Board of Supervisors violated Virginia’s Freedom of Information Act (FOIA) during five closed-to-the-public meetings in 2016 while choosing a replacement for retiring Rappahannock County Attorney Peter Luke. The case is known as Bragg 1 to distinguish it from a second case Bragg filed against the BOS in 2017.

According to a letter of agreement signed by Bragg on Sept. 26, 2016, Konick charged her a “non-refundable retainer of $1.00” and acknowledged that he would take the case on a contingency basis: He would charge no attorney’s fees, but would expect to be paid by the county if Bragg “substantially prevails.”

“As we have discussed,” Konick wrote in the letter, “the Virginia Code provides for an award of attorney’s fees in the event a FOIA challenger ‘substantially prevails’ in the matter. In light of the public interest aspects of this matter, I am willing to accept employment in the case for whatever fees the Court sees fit to award, if any, pursuant to Virginia Code Section 2.2-3713(D), based on my regular hourly rates [of $250].”

Will Bragg 1 ever be over? One month shy of the fourth anniversary of its filing date in September 2016, Marian Bragg v. BOS of Rappahannock County was back before Judge Jeffrey W. Parker in Circuit Court.

At a recent hearing covered by Patty Hardee of this newspaper, Konick presented two documents — totaling nine single-spaced pages — listing dates and services rendered from Sept. 21, 2016, to Aug. 24, 2020. Attorney Mike Brown, defending the county in the case, objected repeatedly to the documents, calling them “hearsay” in the eyes of the law because the truth and authenticity of the time charges could not be verified. Brown also charged that Konick had not supplied his billing records during evidence discovery earlier in the case.

“You haven’t produced [documents] authenticating these expenses and whether they’ve been paid,” Brown said, arguing that laws governing recovery of expenses are to help clients recover fees they paid, not to make it easy for attorneys to make money for themselves. Brown moved to suppress the records from evidence.

Under oath, Konick testified that the documents represented “a true and accurate accounting of my time and expenses” that he compiled by reviewing his own files, invoices, and correspondence. He told the court that Bragg had paid all but about $1500 in court reporter fees. Parker also questioned Konick about how he had arrived at charges for time spent.

“I’m trying to figure when you prepared [the first document],” Parker said. “And how do you know you spent the time you say [you spent]?”

On the issue of whether Bragg had, in fact, substantially prevailed in the case after the two-day trial in February of this year, Brown said it was something the court needed to decide. In referring to Parker’s March 5, 2020, opinion letter, Brown pointed out the claims Bragg made that she did not win.

In his March letter, Parker ruled that although the Board’s closed-door discussions were overly broad and strayed into areas not exempt from FOIA, he found “no ulterior motives” on the part of the Board of Supervisors in conducting those closed meetings. He also narrowly granted relief to Bragg, saying: “To the extent that [Bragg] seeks an injunction against further similar discussions of attorney hiring in closed session, that will be granted for a term of ten years.”

Asked if changing an opinion letter is common, Brown, in a phone call to this newspaper, said that courts must respond to an attorney’s motion to appeal.

“But,” he said, “for a court on its own initiative — without a motion to reconsider — to announce it intended to rewrite part of an earlier opinion is uncommon.”

At the end of the hearing, Parker said he would take under advisement both issues — whether to suppress Konick’s statement of his fees and expenses and whether to award attorney’s fees.

In a post-hearing phone call, Stonewall-Hawthorne supervisor Chris Parrish, named in the Bragg case, lamented that the suit “distracted us [the supervisors] from doing the county’s business and it cost the taxpayers.”

Now, in his letter to Konick, Brown and Goff — filed today, Sept. 10, in the Clerk's Office of the Rappahannocķ Circuit Court — Judge Parker writes in full (click link to view PDF of letter): 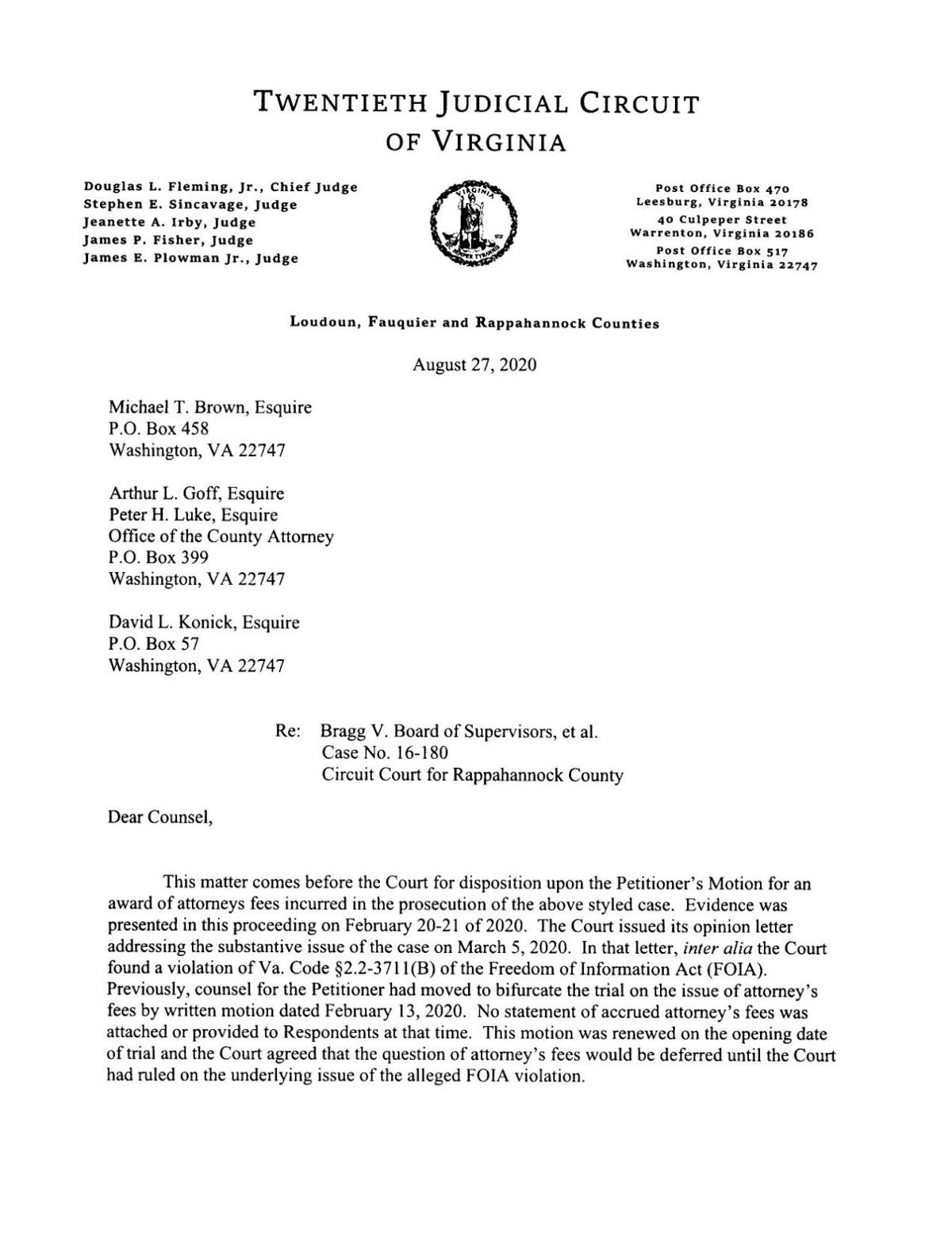