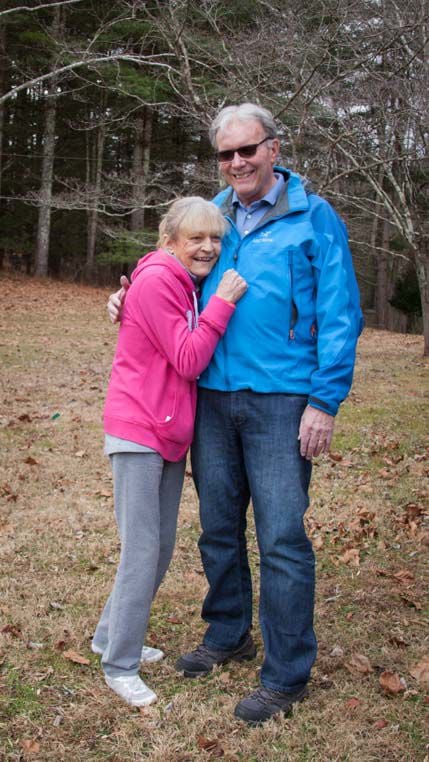 M.J. Wooldridge: So Many Stories

M. J. Wooldridge grew up in a rural part of Kentucky, one of the reasons she loves Rappahannock so much.

She has learned a lot about the community in the two decades she’s been here, but particularly in the past four years. That’s how long she’s been a volunteer driver for the RappMedRides and RappRides. Usually Wooldridge drives people for medical appointments or physical therapy, but she also has taken older women on shopping trips.

“It’s constant talking on a lot of these trips,” laughed Wooldridge, who said she tries to drive at least two or three times a month. “That’s one of the reasons I really like working with older people. They are so willing to share their lives and their perspectives. I love what they tell me about their history in Rappahannock.

“They’ll tell you, ‘That used to be this’ or ‘This wasn’t a road; it was just a path.’ And they talk a lot about what it was like to grow up here, what going to school was like. You hear how little they had, but how rich their lives were.”

She said the driving has also given her a sense of how many of Rappahannock’s older residents are alone. “There’s more of these isolated old people than I thought there were,” she said. “And there are probably still more than I suspect out there.”

She also was quick to acknowledge that the benefits go both ways.

“The riders are always saying to me, ‘Thank you so much. You’re giving up your time.’ What they don’t realize is the history they’re sharing and the friendship they’re giving me.”

As a retired doctor, Dave Litaker understands better than most the consequences of people missing medical treatments because they can’t get to them.

So, while he’s been a volunteer driver for only a year or so, he has thrown himself into the effort. He drives for both RappMedRides and the American Cancer Society’s Road to Recovery, and can make up to 10 trips a month between the two.

Litaker, who at 59 is young for a driver, has no regrets. “The thing I enjoyed when I was in medicine was making connections with people. But as time went on, the industry changed, and it became more and more difficult to establish relationships,” Litaker noted. “There was this constant pressure to move people through the office.

“There were two things that compelled me to start driving,” he continued. “I wanted to give back to the community. And I wanted to get to know folks that I wouldn’t have been likely to come into contact with.”

A case in point was a rider he drove to Charlottesville for treatment several times. “This person talked to me about their interest in hunting. And our conversation moved to cooking what you kill,” he said. “I was fascinated that this had been a part of this person’s life for so long.”

More than one person has told him that they wished they had called for a ride sooner. But they thought it might be an imposition. Or they weren’t quite ready to trust a driver they didn’t know.

Litaker said he understands that. But he hopes more people will start to take advantage of the services.

“People can use this as a real lifeline,” he said. “Not just to get to the doctor, but also just be able to talk to someone. I usually don’t have to say much. I’ll say, ‘Tell me about your grandchildren,’ and it just keeps rolling out.”

Although they live only 10 minutes apart, chances are that Dan Lanigan and Christine Van Mulders might never have met if she hadn’t needed rides to cancer treatments. But on a spring day last year, Lanigan drove to Van Mulders’ home in the town of Washington, and it didn’t take long for a friendship to take root.

Lanigan, 73, retired in 2012 and moved to Rappahannock the following year. Two years ago, with a goal of staying active, he responded to a note on RappNet and became a volunteer driver for the American Cancer Society’s Road to Recovery. He also now drives for VolTran.

“You get to meet people from different walks of life, with different backgrounds,” he said. “People I wouldn’t normally run across in my daily life.”

That certainly included Van Mulders, a 76-year-old widow who still speaks with the accent of her native France. She was unable to drive at the time, and wasn’t sure how she would get to her radiation and chemotherapy treatments in Culpeper. She first called a ride service whose card she had picked up in a store, and they referred her to the American Cancer Society.

Lanigan said they hit it off from the start. “We were never at a loss for conversation,” he said. “We talked about our families, food, cooking, France, life in Rappahannock. The list goes on and on.” He shared stories about his twin granddaughters when they came to visit last summer; she told him about driving the tractor around her property after her husband became wheelchair-bound, and about a bear that climbed up on her deck.

The conversations went on for five months, during what Lanigan estimates were at least a dozen trips together. When she could, Van Mulders would try to schedule appointments near lunchtime, so she could treat him to a meal. It was her way of showing her appreciation.

In late September, Lanigan drove her to the Emily Couric Cancer Center in Charlottesville. She had a scan in the morning and then, after lunch together, Van Mulders went to meet with her doctor.

When she came out of the office, Lanigan recalls, she had a big smile on her face.

Van Mulders had just been told she was cancer-free.

It was wonderful news. For both.

“He sees a need in the community and then chases after it,” she said. Canton would know. As coordinator of the RappMedRides and RappRides volunteer driver programs, she has worked closely with Hunter for years. In fact, she credits him with starting RappRides, the free service that takes people shopping on Fridays.

That’s just one of his many contributions to the community. He’s largely responsible for the opening of the Food Pantry and the launch of Rapp at Home. When Richard Shrout, the nurse navigator for cancer patients at Fauquier Hospital, wanted to revitalize the American Cancer Society’s Road to Recovery program in the region, he asked Hunter for help in recruiting drivers in Rappahannock County. Hunter delivered. More than a dozen people signed up.

He did likewise for VolTran, the volunteer driver service in Fauquier, when it wanted to expand into Rappahannock and northern Culpeper counties. And to help the FAMS Call Center get more exposure throughout the area, particularly in Rappahannock, he designed, printed and distributed marketing pamphlets about the referral service.

Hunter, now 82, says there was nothing special about his recruiting techniques. He would simply place a notice on the RappNet listserv announcing a meeting for people interested in volunteer driving. That there usually was a good turnout was a testament to his high regard as an activist for people in need.

Hunter himself started driving six years ago. “I needed to get out of the house. Volunteering makes me feel good,” he said. He noted that when he recruits drivers, he doesn’t talk much about his own experience. Rather, he focuses on the often desperate needs of county residents who lack transportation. By his own rough estimate, Hunter suggests there could be as many as 500 older people in Rappahannock living alone, and without a way to get around.

“Socially isolated people will say, ‘Don’t worry about me. I’ll be okay,’” he said. “Identifying who these people are is difficult. But it’s really important.”

Going nowhere? Part one of a two-part series on the lack of transportation in Rappahannock County

Part one of a two-part series Part 2 (Feb. 22): Ridesharing services such as Uber and Lyft don’t work very well in rural areas. So what does? Part 2 will look at how other communities are dealing with transportation challenges, and also how some people are rethinking rural mobility.