A top U.S. Postal Board official weighed in on site selection, prompted by an influential Rapp resident who was former chairman of the postal service governing body
— ‘It feels like a slap in the face to the residents of Washington and Rappahannock County’ […] 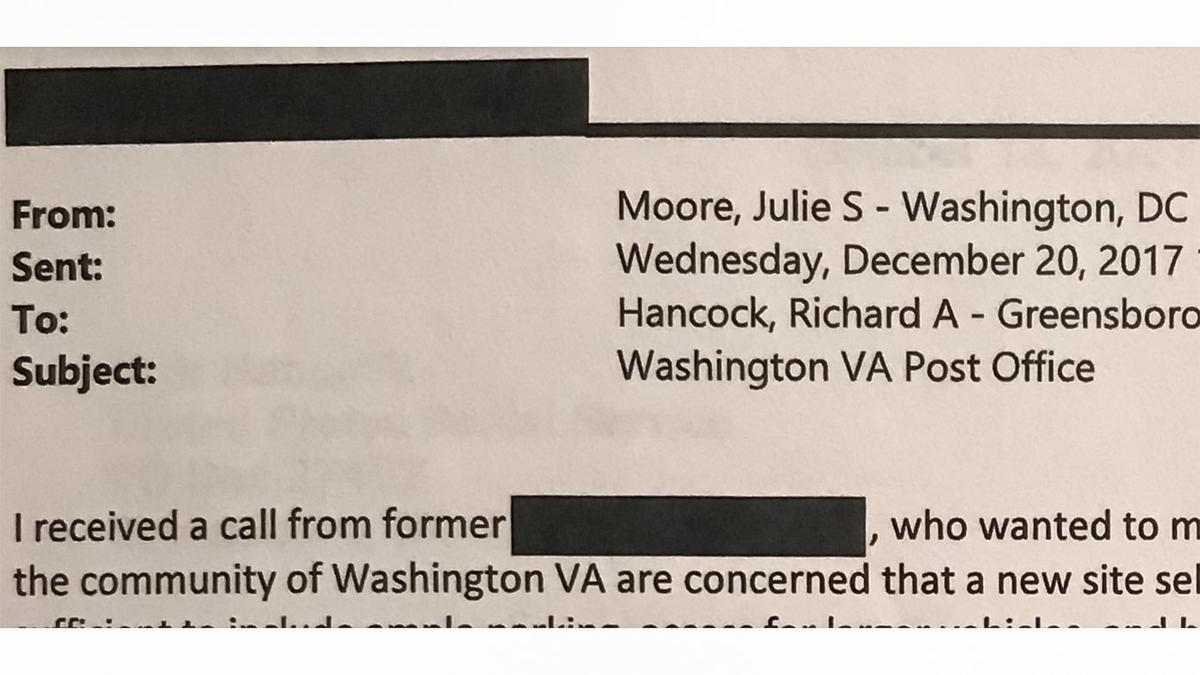 Julie Moore, longtime Secretary of the United States Postal Service Board of Governors, inserted herself into the site selection process of the Washington Post Office, incorrectly stating that a “majority of the community” preferred that the post office be moved “outside the town limits.” […]

A top U.S. Postal Board official weighed in on site selection, prompted by an influential Rapp resident who was former chairman of the postal service governing body
— ‘It feels like a slap in the face to the residents of Washington and Rappahannock County’ […]

Julie Moore, longtime Secretary of the United States Postal Service Board of Governors, inserted herself into the site selection process of the Washington Post Office, incorrectly stating that a “majority of the community” preferred that the post office be moved “outside the town limits.” […]

A top U.S. Postal Board official weighed in on site selection — prompted by an influential Rapp resident who was former chairman of the postal service governing body

The historic town of Washington Post Office barely serves 300 customers per day, yet one of the top U.S. Postal Service officials in the United States weighed in on its future location that now apparently will take it out of the county seat for the first time in 215 years.

Julie Moore, who until July 2018 was the longtime Secretary of the United States Postal Service Board of Governors, wrote Dec. 20, 2017 to USPS site selection specialist Rick Hancock that she received word from James C. Miller III, a former U.S. Postal Board Chairman and resident of Rappahannock County, that a “majority of the community” preferred that the post office be moved “outside the town limits.”

Despite Moore’s assertion, no survey was ever conducted by the U.S. Postal Service, the Washington Town Council, or Rappahannock County government to determine citizen preferences for a future post office site. Miller acknowledged in a telephone interview Tuesday that the secretary’s statement was based on his own informal survey of bank customers and employees.

“It feels like a slap in the face to the residents of Washington and Rappahannock County when someone with the Postal Service in Washington, D.C., makes a decision and disregards the wishes of the local population,” Washington Mayor Fred Catlin said this week about Secretary Moore’s involvement in the site selection process.

“I received a call from former [Postal Board Chairman Miller], who wanted to make sure you were aware that quite a few in the community of Washington, VA are concerned that a new site selected for the Post Office might not be sufficient to include ample parking, access for larger vehicles, and be in a location that those who do not live in the town of Washington would find convenient,” Hancock was told by Moore, who was appointed Postal Board Secretary in April 2008 until her retirement last summer.

“I believe you are currently working on the site selection, and I have no doubt that you are listening to the community, but I told him [Miller] I’d pass on the comments,” she told Hancock, who from his Greensboro, N.C., office steers site selection of postal facilities throughout the southern region of the U.S.

Miller’s name in Moore’s letter was blacked out by the Postal Service before it was provided to the Rappahannock News. It was among several thousand pages of correspondence surrounding the future site of the Washington Post Office obtained by this newspaper under the Freedom of Information Act.

“[Miller] would be happy to meet with you around that time if you think it would be helpful,” Secretary Moore continued. “[Miller] made a point to tell me that there is no particular site this group of citizens is advocating, but they would like it on a major road just outside the town limits near other major locations (schools, etc) with ample parking.”

Moore, who could not be reached for comment this week, then stressed: “This is in no way intended to interfere with any site selection you find appropriate, and [Miller] conveyed that as well. It is just to ensure you are aware of these issues before you make your final selection. Thank you. Julie Moore.”

Hancock later that day wrote back to Moore that he “would be glad” to meet with Miller, and told her that any “site selection will take into consideration the issues you referenced,” as well as “operational and economic considerations.”

In previous public comments, Hancock said Postal officials desired to keep the post office inside Washington town limits once it vacated its Main Street location, where the lease is expiring.

The town of Washington, working diligently to keep its centuries-old post office, offered the USPS several alternatives for a new location, from existing buildings to a vacant lot at the town’s entrance — only feet from Highway 211 — where a new facility could be built.

As for potential sites south of of the town, Hancock went so far as to caution U.S. Postal headquarters at L’Enfant Plaza in Washington, D.C.: “Please note that Washington is very small and 2 miles would effectively put us out of the preferred area.”

“I did nothing improper”

Reached this week, Miller told the News that he saw nothing wrong with his reaching out as a “private citizen” to Moore and having her weigh in on the process.

“I did nothing improper with that,” Miller said, adding: “I got involved because it seemed to be a bad rush to try to impose on the Postal Service a suit of clothes that didn’t fit well.”

“I had something to say like anyone else,” he stressed. “I would not hesitate if I saw a problem — when there was the danger of a wrong decision for the wrong reason — to bring it to the attention of anyone.”

Miller said he told Moore: “Don’t just take representations made by a few people as being reflective of the views of everybody else.”

As for Moore’s contention that a “majority of the community” wanted the post office moved out of the town, Miller believed the secretary based her statement on his own informal polling of customers and employees of the Main Street post office whenever he conducted business there.

About three weeks after Moore relayed Miller’s preference for the highway location, Hancock received another letter, this one from Miller’s wife, Demaris, stating that she was “one of the majority of the 22747 postal patrons who do not live within the Town of Washington. What happens to that Post Office is our business too.

“I do not shop in town, as all the little boutiques are expensive and cater to tourists,” she wrote the USPS official. “I do not dine in town, except at the Country Cafe, next door to the Inn, but I have been told that it will not be there much longer. I used to bank in town, on Gay Street, but the bank moved out to Highway 211 when they were told that a drive-in teller did not suit the ambience of the town . . .

“When we visit the current Post Office, my husband [James Miller] and I often have some difficulty parking,” Mrs. Miller continued. “When the Inn holds ‘special events,’ some of the Postal trucks have to park on the street to load and unload.”

She concluded: “If the town wants to have a cute, little, architecturally-acceptable Post Office, let then have a little contract office there like the one at seaside [sic], Florida.”

As it was, the USPS announced Sept. 1, 2018 and again last week that the post office would be leaving the county seat for the first time in 215 years.

Hancock confirmed in an earlier telephone interview with the Rappahannock News that it was “people at the top” of the Postal Service who made the “operational decision” to move the post office to Bank Street, two miles south of the county seat off Highway 211 and close to the elementary school, which Moore stated Miller desired for some reason.

Five days before the USPS announced its move, Hancock wrote to U.S. Postal Customer Service Manager Timothy Talley in Arlington: “Due to the Political nature of the project we would like the final decision to be from Mr. [Jeffrey] Becker [Northern Virginia District Manager] and Dennis [Vorhees, Manager Post Office Operations, Merrifield, VA] or yourself.

“In addition I recommend that we address the decision proactively with the [name blacked out by the USPS] and the locals including a news release. There will be push back on the decision to move out of the downtown area,” Hancock warned.

“It’s kind of like David and Goliath where Goliath, in this situation, is wielding great power and influence over the fate of our little town post office and the customers trying to keep it here,” said Washington Vice Mayor Mary Ann Kuhn. “We may be the underdog now but we are going to continue to fight to keep it in town.”

The Board of Governors, in which Moore and Miller both served in leadership positions, was established by the Postal Reorganization Act of 1970. It is comparable to a board of directors of a private corporation and includes nine Governors who are appointed by the U.S. President with the advice and consent of the Senate.

A career Postal official, Moore previously oversaw all internal and external communications for the USPS and served as Manager of Compensation for all its employees, designing and implementing national pay and benefit policies.

The Washington Post Office, among the oldest in the country, was established Oct. 1, 1804, the same year the Lewis and Clark Expedition was launched and Thomas Jefferson defeated Charles Pinckney in the U.S. presidential election. It has moved an estimated four or five times over the past 215 years, although it has always been centrally located within the town’s boundaries.