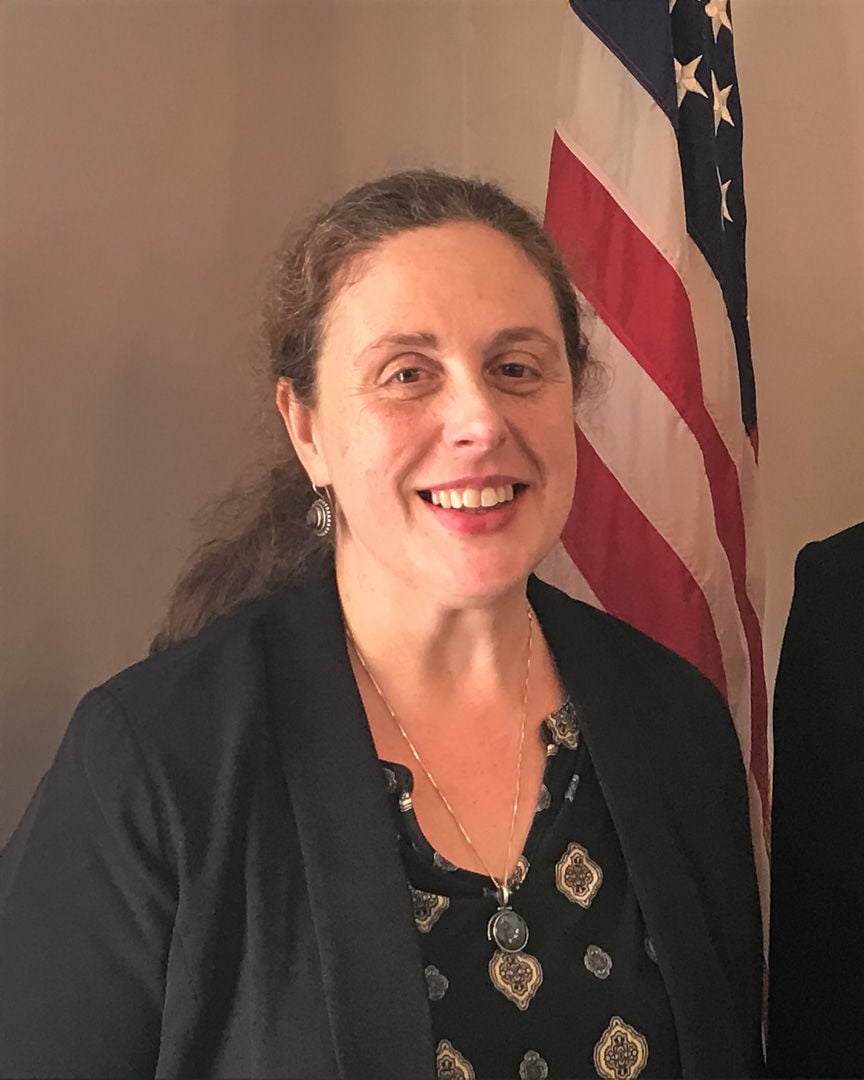 Board of Supervisors Chair Christine Smith 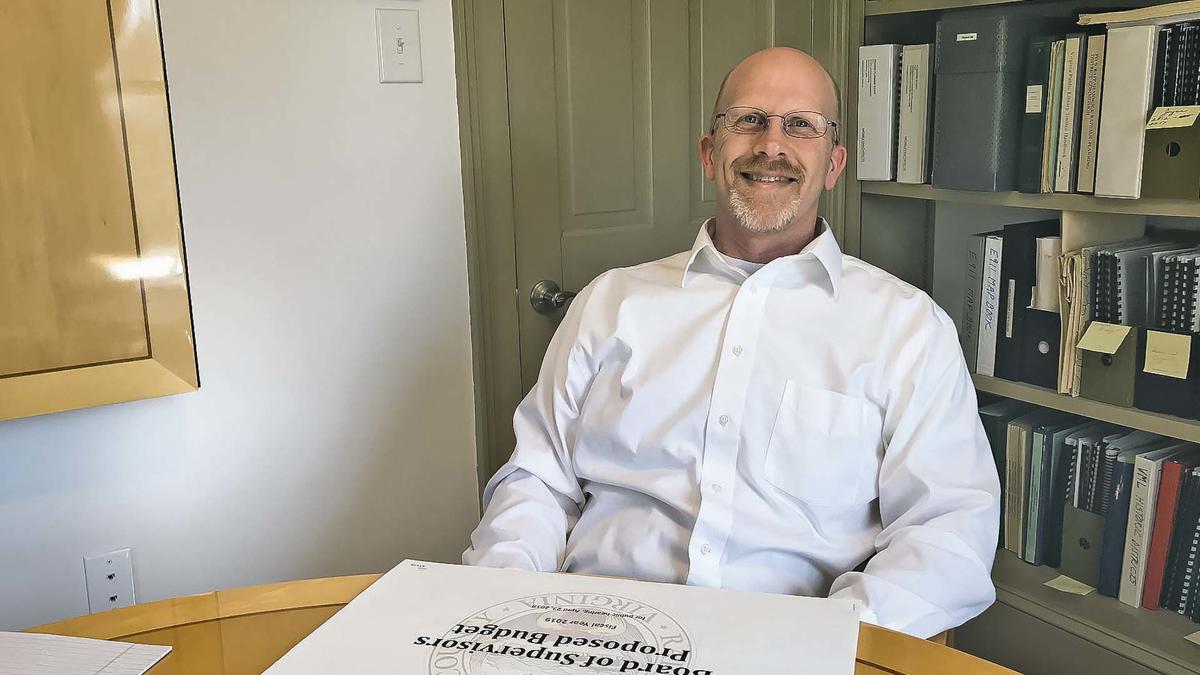 Garrey Curry has been the Rappahannock County administrator since January 2018. 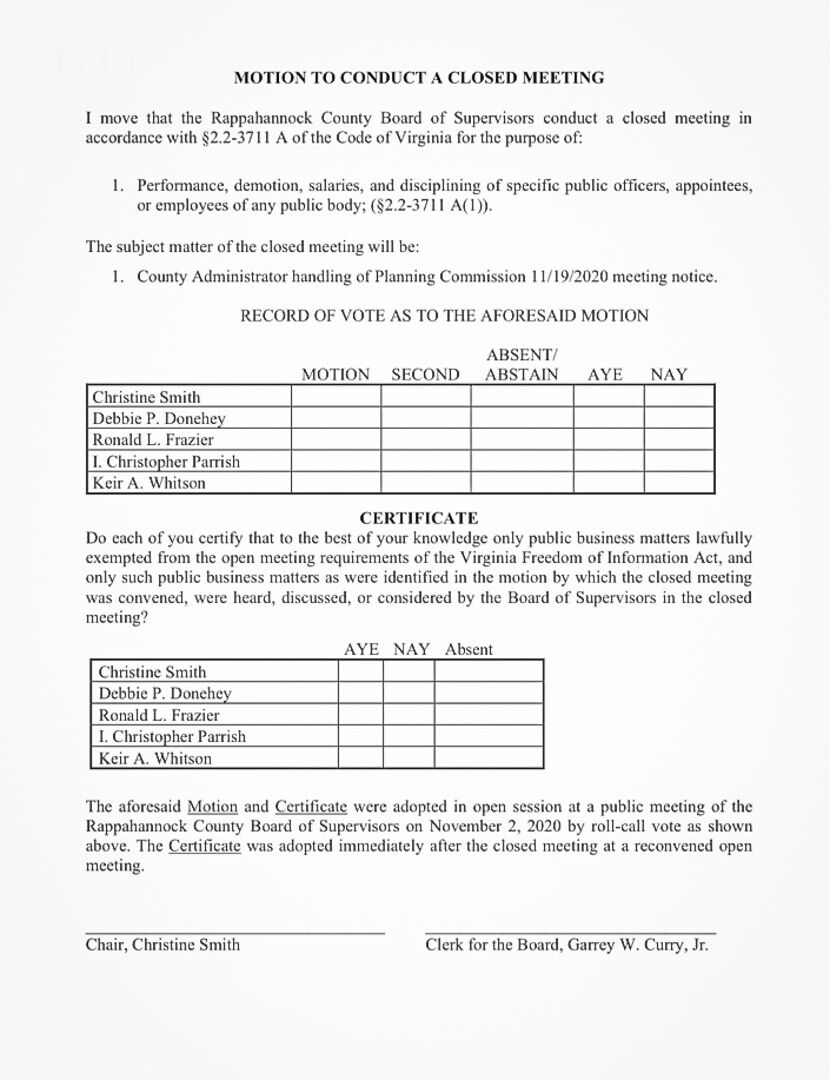 ‘Gary deserves a raise, not public chastisement … his character is impeccable’

Three Rappahannock supervisors on Tuesday rushed to defend Rappahannock County Administrator Garrey W. Curry after Board of Supervisors’ Chair Christine Smith proposed the BOS go into “closed session” at its next regular meeting purportedly to discuss Curry’s performance in office.

“I cannot fathom why, especially during this challenging time, the board’s chair would try to discredit someone who, by any objective measure, has worked hard to save taxpayers money and keep our county on track,” reacted Supervisor Keir Whitson.

“The shortsightedness of the board’s chair in tearing down Mr. Curry over something so insignificant and meaningless is a disservice to him and the Rappahannock County community. Most significantly, the unilateral and counterproductive action of the chair could undermine the fiscal and management stability Mr. Curry has brought to bear on our county. And to what end?” Whitson asked. “Mr. Curry has my full support.”

Smith declined earlier this week to speak on the record with this newspaper, which had sought to clarify a series of emails she sent to Curry beginning at 6:59 a.m. Monday morning. The news obtained the emails from a source outside the county administrator’s office.

Smith wrote: “One last [agenda] item for next Monday[’s meeting] would be a personnel discussion during closed session as it relates to the botched notice for the recent joint [comprehensive plan] worksession,” Smith wrote in her first email. “Please confirm that this has been added to the agenda with the particulars required. Thank you, Christine.”

Curry knew all about the “botched notice,” as Smith called it.

He took blame in recent days for his role in failing to post within the required Virginia FOIA (Freedom of Information Act) time frame advanced notice of a special Planning Commission meeting concurrent with a BOS special meeting on Monday, Oct. 19, to discuss the county’s comprehensive plan.

UPDATE: There are new developments in this story here.

Virginia code compels public bodies to notify the public “at least three working days prior to the meeting.” As it turned out, notice of the meeting didn’t get posted until after midnight on Wednesday.

Planning Commission Chair David Konick wrote in an email that he was “astounded” by the county’s failure to give adequate notice of the joint meeting. Curry quickly apologized for the oversight, saying “no excuse is sufficient.”

The apology was “duly accepted” by Konick, who actually forwarded to Curry a link to Willie Nelson’s “It’s Hard To Be Humble” music video, reminding the administrator that almost everybody makes mistakes “once in a while.”

But Smith has now presented an official avenue for her fellow supervisors to take the “botched notice” one step further — into a closed session, where it appears potential disciplinary action could be discussed (were the BOS to agree to the chair’s close session motion).

When Smith in Monday’s emails to Curry requested that the administrator add required “particulars” to her motion, he asked the BOS chair to provide further information.

“I’m not sure how to best prepare this item without more detail,” Curry wrote. “The motion must include both a ‘purpose’ which should be a portion of Code of Virginia 2.2-3711.A.1 (or the entire section) with reference to § 2.2-3711.A.1, and a ‘subject,’ which must identify the relevant topic and the ‘specific public officers, appointees, or employees.’ I gather that you may want the subject to be something like ‘County Administrator handling of [the] Planning Commission 11/19/2020 meeting notice,’ but I am not sure.

Smith replied: “I’d include performance, demotion, salaries and disciplining of employees for non-performance, if needed, you can add of FOIA duties. I hope this is clear enough, if not, just let me know. Thank you, Christine.”

Still confused, Curry responded: “Unfortunately, this does not help me clearly define the purpose and subject. I’m attaching a draft of what I think you are asking for that you can mark up with changes if it does not include what you intend. Hopefully that will be easier than exchanging email.”

What Curry ultimately drafted was good enough for Smith: “Looks great, thank you. Please include it. Christine.”

The resulting “Motion to Conduct a Closed Meeting” states: “I move that the Rappahannock County Board of Supervisors conduct a closed meeting in accordance with § 2.2-3711 A of the Code of Virginia for the purpose of: 1. Performance, demotion, salaries, and disciplining of specific public officers, appointees, or employees of any public body …”

Reached by the News on Tuesday and asked about Smith’s motion, Curry would only say: “I wasn’t elected to anything. Elected representatives have the right to form their own opinion.”

What Curry did not say the three supporting supervisors made up for.

“I am deeply disappointed to see pettiness and ‘gotcha’ politics creep into our community and our new board,” Whitson said later. “Garrey Curry is a true professional. In conjunction with a civil and forward-looking Board of Supervisors, I am confident he will help us accomplish great things for our community …

“Mr. Curry has already taken responsibility, deserved or not, for whatever minor administrative oversight might have occurred.”

Donehey, who with Whitson was elected to the board last November, said this evening that she “was shocked and saddened to see BOS Chair Christine Smith’s motion …

“Shocked, because I first learned of it from our county administrator, and saddened because there is no basis for such a public embarrassment of Mr. Curry. Garrey has already stepped up publicly about the matter in question,” said Donehey. “It involved no larger error than a late public meeting notice. We all make mistakes. This did no harm. Garrey is a great asset to this county, and we are lucky to have him.”

As for the oversight itself, Donehey pointed out: “There was no need to rush. The meeting in question involved further consideration of the county's comprehensive plan, and we have until late-December — a couple of months — to make a final decision. A joint meeting has already been added to the agenda for the November 2nd BOS evening session; thus, we are still on track. So why an attack on Garrey Curry?”

She then rattled off several of Curry’s accomplishments since he was hired to fill the senior government post in January 2018, in doing so labeling him “an asset to our county.”

“He is well respected by his peers in surrounding counties,” Donehey stated. “He works well with the School Board and our Sheriff’s Office. He works well with our county Treasurer, and together they have improved the budget process and our bottom line. He worked quickly to resolve our refuse problem and orchestrated a transition that saves the citizens of Rappahannock County over $200,000 annually. He has worked on the radio system transition for our Sheriff’s Department and Fire and Rescue,” she continued.

“The lack of a back-up generator and the electricity upgrade that was needed in the county complex was planned and the work was completed without most knowing it occurred. I was told by Sheriff Compton that the work he did was fantastic. And, of course, COVID hit us in March. He has dealt with the resulting challenges as if the pandemic was like the common cold.

“This just leads me back to my same question: why the attack on Garrey Curry?”