The Washington Post Office is slated to move to Highway 211 against the wishes of the mayor and many others in the community. […] 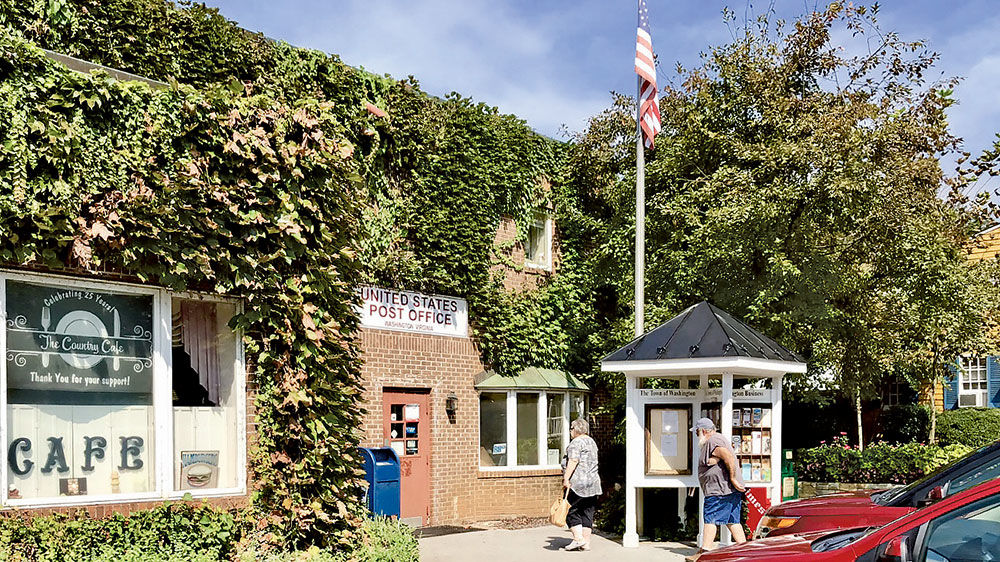 The Washington Post Office, a fixture in the historic town since 1804, is slated to move to a site off Highway 211, outside of the town limits. […]

The Washington Post Office is slated to move to Highway 211 against the wishes of the mayor and many others in the community. […]

The Washington Post Office, a fixture in the historic town since 1804, is slated to move to a site off Highway 211, outside of the town limits. […]

Former Postal Board of Governors chairman, who lives in county, admits weighing in on site selection process

Every day as sure as the sun rises Nancy Buntin leaves her home next door to the Foster Harris House and walks the several blocks up Main Street to collect her mail from the Washington Post Office.

“Just like my father before me,” Buntin said of her daily ritual.

But soon, she and other residents of the historic county seat, where the post office has been a fixture since John Strother, Jr. became the town’s first postmaster in 1804, will likely resort to horsepower — mechanical if not four-legged — to reach a modern postal facility now slated for the mid-county Route 211 corridor.

Without naming names, U.S. Postal Service real estate specialist Rick Hancock said “people at the top” of the independent agency made an “operational decision” to move the post office out of the town after 214 years and onto the four-lane highway, where a large building will be constructed on a vacant lot bordering Bank and Schoolhouse roads.

Meanwhile, Jim Miller, the former chairman of the Board of Governors of the United States Postal Service who lives in Rappahannock County, confirmed this week that he was involved in the site selection process, telling this newspaper that he encouraged the USPS to consider all options and opinions surrounding a new post office, not just those of the town and its residents.

Miller, speaking by telephone from Washington, D.C. on Tuesday, said he had requested a meeting more than six months ago with USPS real estate specialist Rick Hancock, who is based in North Carolina, and the two met for coffee at the Country Cafe in Washington.

The former postal board chairman acknowledged informing Hancock that a “majority” of Washington Post Office customers “do not live in the town,” so there was a “broader perspective” the USPS needed to consider in the site selection process.

“What I told him was he needed to look at all of the concerns” surrounding a post office location, Miller explained.

Washington Mayor John Fox Sullivan, at the same time, blasted the U.S. Postal Service this week for its “bizarre” process in choosing the highway site.

In a blistering statement issued Tuesday, Sullivan said: “It was the most opaque process, not an open one — no real RFP (request for proposal), no explanation of decision criteria, no contact or discussion with the true decision makers allowed.

“They clearly did not care about the impact of foregoing an acceptable [town] location readily accessible to the bulk of its governmental, commercial and residential users for one two miles away. They did not say our Gay Street site would not work, but rather that a new building was ‘preferred’ for frequent truck access. And now they have chosen a location between the bank and the elementary school with no input from the county government, schools, safety officials and citizens. Bizarre.”

Earlier, the mayor said he was “keenly disappointed and extremely frustrated,” pointing out “for the first time since 1804 there will not be a post office in the town of Washington,” coming to the conclusion that the USPS “didn’t much care about the impact on our local community.”

“I hate to see it go,” Buntin said as she retrieved letters from one of the 416 post-office boxes on Main Street. “I get to talk to people here.”

A constant refrain of other postal customers who spoke to this newspaper.

“The biggest issue is a whole group of people will not be coming into town anymore, and it is not a small group,” Washington resident Robert Ballard of R.H. Ballard Shop & Gallery on Main Street pointed out. “The camaraderie will be gone, the chatting among people, getting daily updates on what is happening in the community.”

“Very, very sad,” seconded Emily Moore, also a town resident who manages August Georges on Main Street. “For generations it’s been a meeting place of residents. And no more walking.”

“I’m sorry to hear it, but I’m not surprised,” reacted former Washington Town Council member Gary Aichele while in the post office lobby, where vintner John Quievremont of Gid Brown Hollow was expanding on rain-soaked grapes

“It’s going to be hard to walk out [onto the highway] and see all my buddies at the new one, I can tell you that,” Aichele turned to say while ducking out the door.

Two postal clerks on Main Street said customers have expressed both positive and negative feelings about the post office skipping town — “more sad than happy,” one of them added.

Still, from a working perspective, the clerks applaud the decision to relocate, calling attention to the building’s crowded conditions and pointing out the boxes of mail and packages that were scattered about the floor.

Butch Zindel, broker and owner of Rappahannock Real Estate Resources in Washington, was among a handful of town supporters, Mayor Sullivan included, who worked diligently for more than a year to keep the post office within town limits.

He like the others was surprised last Wednesday when a postal official in Fairfax County, with little explanation, announced that the town’s site options would not suffice, and that a more spacious facility was required that would provide ample parking space and room for commercial trucks to load and unload.

“It’s going to impact the town, that’s for sure,” opined Zindel, equating it to when the bank and library left town for the busier highway, leaving the post office as arguably the last remaining gathering spot for the  majority of people conducting daily business in Washington.

While a pair of highway locations were known to be in the running as potential sites for a new post office, moving to a location virtually between Washington and Sperryville makes little sense to Sullivan, who had assured residents last October that “my goal, our goal as a town, is to find space that makes sense for them [USPS] in the town.”

“That is our goal,” agreed Hancock of the Postal Service. But for whatever reason things changed, as did communication between the USPS and the town.

Both Sullivan and Zindel foresee potential problems with the move, not only for the town but the county,  not the least being the future post office facility’s proximity to Rappahannock County Elementary School. “It’s going to be dangerous with the school right there,” Zindel said.

Which has not gone unnoticed by Rappahannock County Sheriff Connie Compton.

“My big concern for the kids is that everybody gets in and out safely,” the sheriff told this newspaper in recent days, adding she expressed that and other concerns in a previous phone call with Hancock. She specifically drew attention to “school lane traffic and traffic flow,” and said safety measures would need to be implemented surrounding the development.

Otherwise, whereas the USPS said it is “looking for long-term benefits” by moving into a large building on the highway, that does not mean that plans are in the works for the Sperryville Post Office — a mere four miles from the new site — to consolidate with the Washington Post Office, despite additional P.O. boxes being installed.

“Whenever we deal with a particular location we are only dealing with that location, whatever the distance to the next post office,” Hancock stressed. “There will be no consolidation or closing of any post offices — [there’s] no connection in any way, shape or form.”

But when the same question about Sperryville was posed twice this week to Freda Sauter, the Postal Service’s corporate communications spokesperson, she declined to provide an answer.

Nor would she comment on whether Rappahannock residents would have a say in the architectural design of the new post office, given the county’s colonial history and it being a gateway to Shenandoah National Park. Similar communities around the county require that developers follow strict architectural standards that conform with the surroundings.

But when asked whether mail delivery might begin for Washington residents now that the post office is pulling out of the town, Sauter stated: “There are no changes in the current modes of delivery for Rappahannock County residents,” adding that the new location “provides easy access for our customers.”

Kathy Farmer, whose Gid Brown Hollow home is closer to the proposed building site than it is to the town, said regardless she will miss driving to Washington.

“I like it here,” she said. “I enjoy coming into town, and visiting other places while I’m here.”

“It’s sad to see it go, and for the town to be losing this,” said Realtor Denise Chandler, who similarly lives outside of town.

The Washington Post Office, for however much longer, remains one of the oldest in the country, established 29 years after the Continental Congress assumed control of postal operations in America in 1775. Town resident Joan Culmer Platt this week passed along an intriguing account from more than a century ago, when the post office was housed in today’s Rappahannock News building at the corner of Main and Jett streets. It is written that the postmistress in those days, Jay West Brown, would blow a fox horn when the mail was ready for pickup.

Such is the unique history of the town’s post office.

Oh well, said one disgruntled Washington gentleman of the move, maybe the new highway facility will find the space for trash and recycling receptacles, which the current post office refuses to provide for its customers.