Uncertainty prevailed around the country this week as voters anxiously awaited the results of the nail-biting presidential election, but in Virginia’s Fifth District the results are all but signed, sealed and delivered.

Once a swing state, the commonwealth has become a bastion of Democratic support — so much so that the Associated Press decided the Virginia race in favor of Joe Biden less than an hour after polls closed Tuesday night.

But the heavily gerrymandered Fifth District — which encompasses Rappahannock and spans from Virginia’s southern border with North Carolina to the exurbs of Washington, D.C. — remains Republican red through and through. 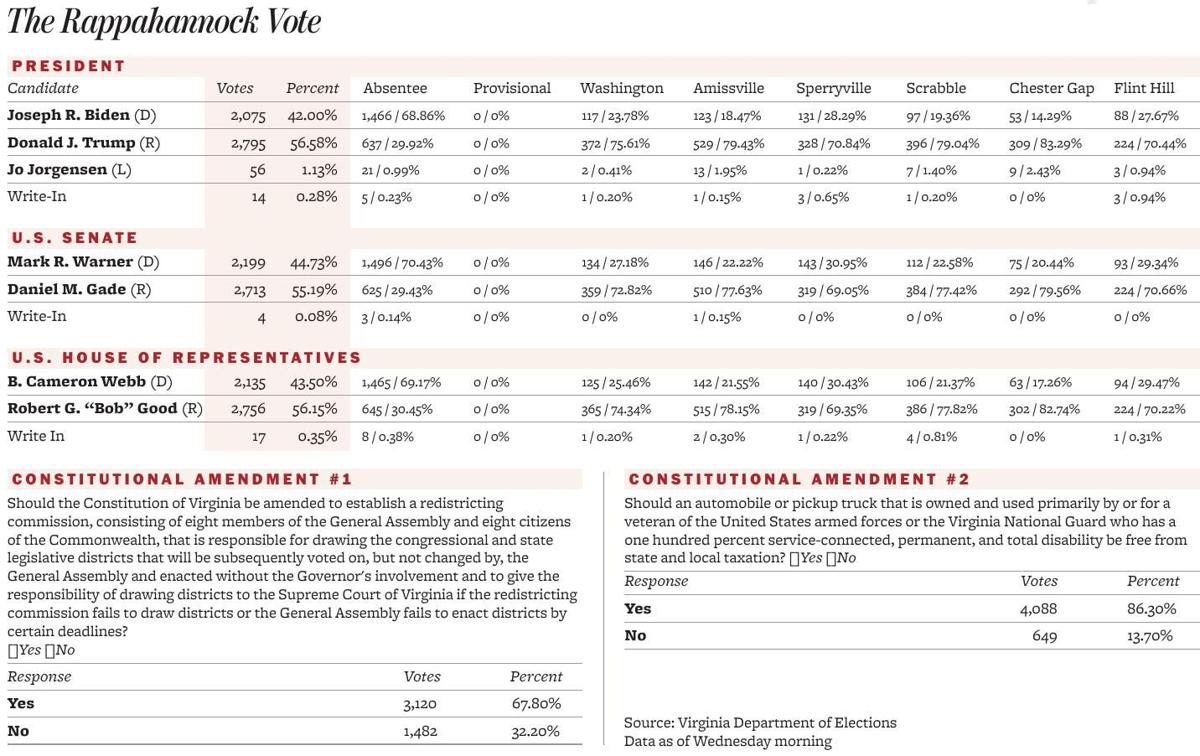 Elections experts predicted the Fifth District congressional race would be among the most competitive in the nation but on Tuesday night the winner was clear.

Republican candidate Bob Good earned a comfortable majority of votes on Tuesday, winning support from more than 53 percent of the electorate and declaring victory just after midnight. Democratic candidate Cameron Webb finished with roughly 46 percent of the vote by comparison and conceded within the hour.

Good trounced Webb in Rappahannock County, winning no less than 69 percent of the votes in every precinct barring absentee votes. At least 2,118 Rappahannock voters cast mail-in ballots this election, and of those Webb captured 1,465.

The Virginia Department of Elections reported on Wednesday morning that already 88 percent of issued absentee ballots were received by their precincts and have been included in cumulative vote tallies, a statistic which extinguishes any chance that late-arriving absentee ballots might significantly alter the unofficial results.

In his Election Night victory speech at Liberty University in Lynchburg, Good thanked his Democratic opponent for giving him a run for his money. “We certainly had to work hard for this,” Good said. “I appreciate the tough race that he put us through.”

Later in the speech Good said he never believed it was the kind of close race that forecasters were expecting. “You know, it’s funny,” he said.

“This race was considered … the only 50-50 race in the country. I think that’s because a lot of people wanted it to be so. We never believed it was a 50-50 race, and it ended up being more like two to one.”

One of the most ardent supporters of Good from the very start of his campaign has been Rappahannock County’s Ron Maxwell, a filmmaker who is most famous for writing and directing the American Civil War movies “Gettysburg,” “Gods and Generals,” and “Copperhead.”

Maxwell did not hold back in his criticism of single-term Republican Rep. Denver Riggleman, who Good unseated in the GOP primary this summer to the surprise of many Fifth District Republicans.

Reached Wednesday morning after Good declared victory, Maxwell wrote to the Rappahannock News: “Our democratic system of self government works only when citizens make it work. We are not the subjects of elected officials. They work for us. Not the other way around. An unresponsive Republican congressman was removed and replaced by the people. Citizens of VA5 rock!"

In a press release timestamped 12:31 a.m. on Wednesday, Webb conceded to Good’s win. “While this is not the outcome we hoped for, it has truly been an honor to run to represent this district in Congress,” the doctor said.

“This campaign has been a battle of ideas about how to best serve the people of our district and I cannot give enough thanks to everyone who made it possible. Congratulations to Mr. Good for his victory and I look forward to continuing to engage with him as we move forward from the election in a unified way.”

"We are particularly grateful to Dr. Cameron Webb for bringing his talent and intelligence as a healer to the 5th District,” said Mary-Sherman Willis, chair of the Rappahannock Democratic Committee.

“It was a joy to work with him and his campaign. We look forward to his leadership, in whatever form it takes, as we tackle the current pandemic and continued erosion of affordable healthcare in America."

Rappahannock Republican Committee Chair Terry Dixon congratulated Good for “overcoming an enormous democrat campaign spending advantage of almost five to one and winning by a margin of over seven percent in the fifth congressional district.”

Dixon continued: “Rappahannock came out to vote in a big way, with President Trump, Daniel Gade and Bob Good winning by a margin of over 12 percent, showing that the majority of Rappahannock voters value our constitutional freedoms, family values and reject the idea of moving our country further toward socialism.”

Asked what his legislative priorities will be when he gets to Congress, Good said “I will be a champion for the sanctity of life … I hope we can get the Life at Conception Act on the floor for a vote.”

In front of the Castleton Volunteer Fire Department, Carl (who preferred not to share his last name) told the Rappahannock News on Tuesday afternoon that though he voted for Obama in 2008, he voted for Trump in 2016. A proud independent and U.S. Army veteran, Carl said he has voted in every election since he turned 18.

Despite Republican challenger Daniel Gade’s 11 point lead over incumbent Democratic Senator Mark Warner in Rappahannock County, the AP declared Warner the victor of the Senate race not one minute after 7 p.m. on Tuesday.

In his victory speech that same night, Warner said he was “incredibly proud and grateful to the people of the commonwealth for sending me back to work in the Senate” for a third term.

Gade, into the early morning hours of Wednesday when there were still ballots to be counted, refused to concede the race to his Democratic opponent, criticizing Warner for illustrating “what people hate about career politicians: the hubris.”

Finally admitting defeat around mid-morning on Wednesday, Gade called on his supporters “to recognize state and federal results with peace and unity.”

In a press release, Gade continued: “No matter the results of the Presidential election, in particular, it is paramount that every American realize that we still live in the greatest country on earth, and to work towards ‘liberty and justice for all.’”

As for the amendments?

Virginia will pass both of the proposed amendments after Tuesday’s vote tallies showed landslide bipartisan support.

Amendment 1, the proposed effort to reign in partisan gerrymandering, was affirmed with 66 percent of Virginians favoring the establishment of an independent redistricting commission.

The commission will consist of eight members of the General Assembly and eight citizens of the commonwealth who will be appointed by retired judges and will be charged with drawing the boundaries for voting districts.

Amendment 2 earned an overwhelming 85.97 percent of the vote on Tuesday. Once officially adopted, the amendment will exempt an automobile or pickup truck owned by a veteran with “one hundred percent service-connected, permanent, and total disability” from property taxation.

Sperryville Election Chief Fred Schaefer said on Tuesday that with record numbers of voters turning out to cast their ballots this year, absentee voting helped limit crowding. “It’s taken a lot of the pressure off today,” Schaefer said.

“It’s been busy and we’ve been steady but it hasn’t been overwhelming the way I have seen presidential elections, where this whole lobby is just filled with people for hours straight.”

Speaking for the Rappahannock Electoral Board on Wednesday morning, chairman Denise Chandler said the “fair, accurate, and appropriately run" polling "was a big win for our county.”

“Democrats and Republicans worked together in peaceful co-existence, whether inside the polls as Election Officials or outside the polls representing their particular political party," Chandler said in a letter to this newspaper.

"While the election was going on, neighbors were engaging neighbors, talking and laughing. There was no need for bullhorns, barriers, or police protection. We were just Rappahannockians — doing our civic duty and then coming back together as one.

“The word of the day was calm. Nobody intimidated anyone, threatened or derided any constituent. The voter’s choice was secret and sacred. That is truly the American way.”

In a subsequent telephone interview, Chandler praised the “hardworking and devoted” Rappahannock Registrar Kim McKiernan, “who should be given all the kudos possible” for the county's smooth election process.

A few clouds from time to time. Low 27F. Winds light and variable.