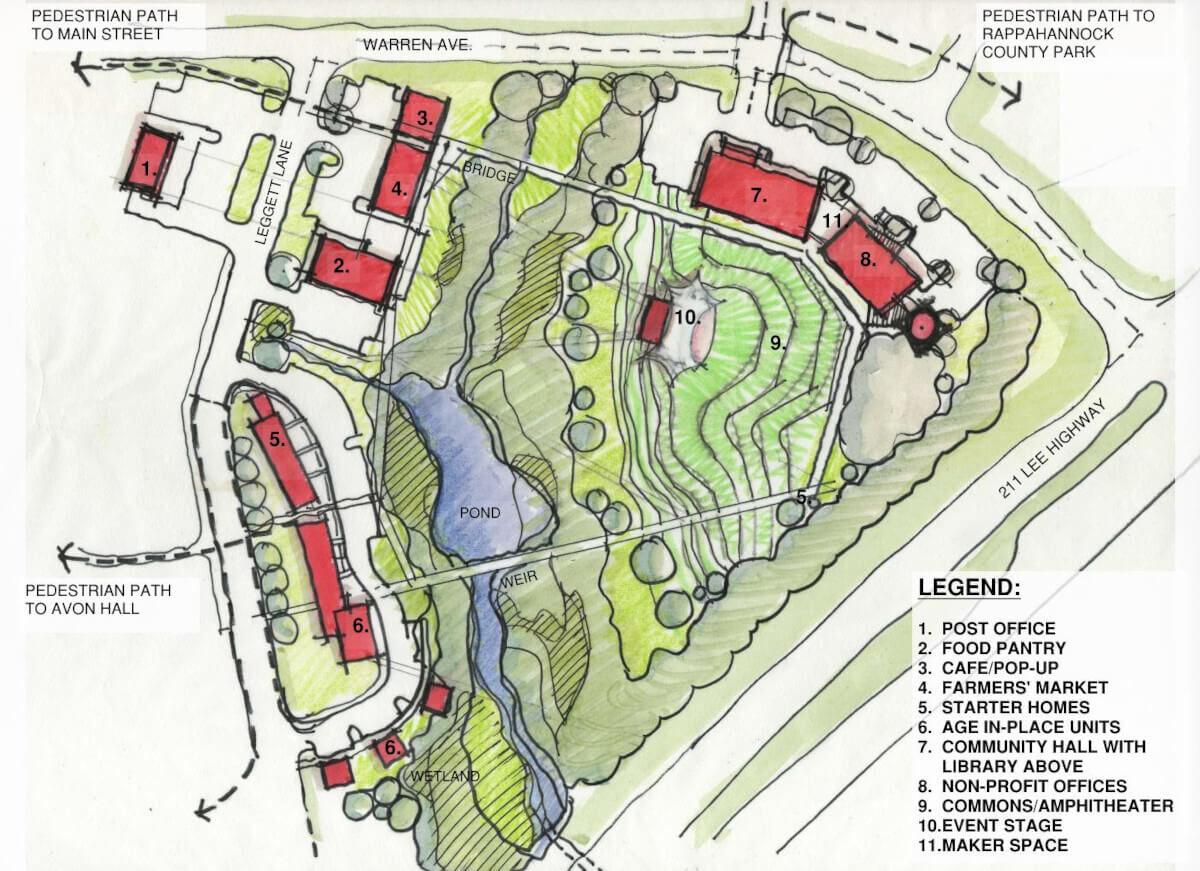 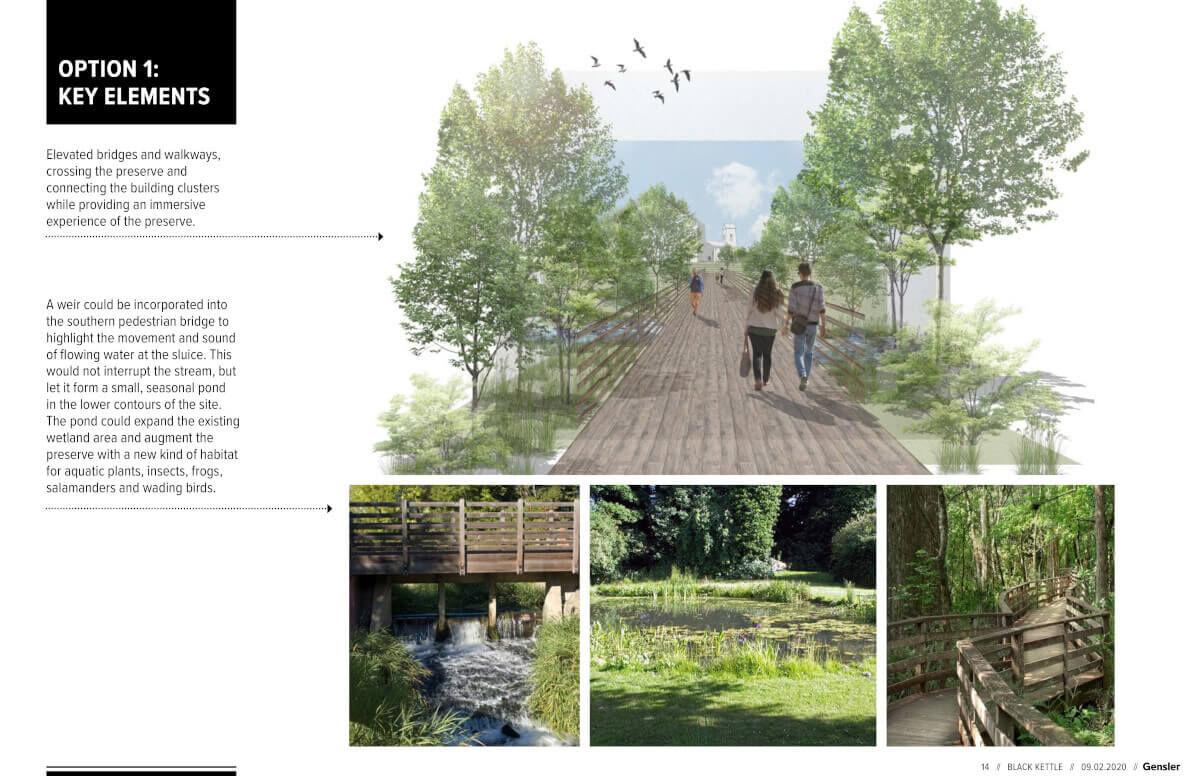 The concept/preliminary layout illustration of walkways in the proposed Black Kettle Commons project in Washington. 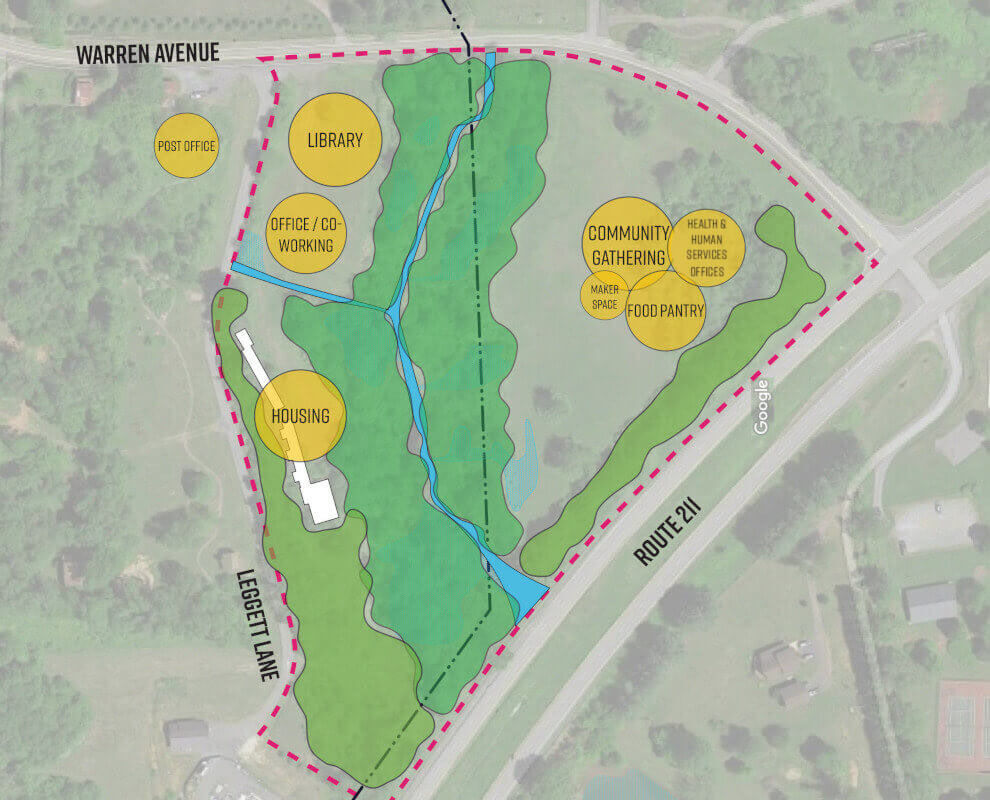 The concept/preliminary layout illustration of walkways in the proposed Black Kettle Commons project in Washington.

At its regular monthly meeting Monday night, the Washington Town Council appointed former council member Jean Goodine to a vacant seat on the council, and heard at length from town resident Chuck Akre about his hopes for development of the Black Kettle Commons on the northeastern edge of town.

The meeting was held online via Zoom, the council complying with Gov. Ralph Northam’s decision last week to extend Virginia’s state of emergency to Jan. 31.

The Akres’ nine-acre site, about half of which lies in Rappahannock County, outside the town’s boundary along U.S. 211 at Warren Avenue, is named for the long-defunct Black Kettle Motel and Restaurant that sits in ruins on its western edge. Akre said he and his wife, Dee, “bought the property a year ago, without having any idea what we were going to do with it . . . and started a listening campaign.”

Among those they listened to were the Rappahannock Food Pantry, with which Akre said “we have a handshake deal” to provide a building site with utilities at no charge to the pantry, which he approached after the nonprofit ran into difficulty finding a new site near Atlantic Union Bank on 211.

“One of the first ideas in my mind was to have some kind of community center for use by all of the county,” said Akre, who credited Betsy Dietel with helping engage top-notch architectural and landscape architecture firms to turn the property’s topography, including the stream and associated wetlands that bisect the site, into assets “that people can enjoy by walking over footbridges and walking trails.”

Discussions are ongoing with the Rappahannock Library, Rapp at Home, the Rapp Center for Education (formerly Rapp U.), the Rappahannock Association for Arts and Community and the Fauquier Free Clinic, among others, Akre said. “There may be some for-profit enterprises,” Akre said, “but largely nonprofits will be involved…. and nothing is concrete at this point, except for our agreement with the Food Pantry.”

In the southwestern third of the property, roughly the site of the old Black Kettle, Dietel added, there are plans for 10 to 20 affordable housing units — “homes for the elderly, or starter homes for young people.”

Woodbridge attorney John Foote, a specialist in land-use cases, added: “Chuck has been very open that this is — well, as all of us in the development world know, there are projects you start off to make a profit in, and don’t make a profit — but this is one he’s starting off with the sense of not making a profit at all. This is a gift to the community.”

The first step for this project to move forward is a boundary-line adjustment — an agreement between the county and the town to extend the town boundary to include the Black Kettle property; the development would otherwise not be able to connect to the town’s water and wastewater systems. Akre and his project team plan to make an informational presentation to the Rappahannock County Board of Supervisors next month.

Any agreement reached by the two jurisdictions would need to be ratified by the Circuit Court, town attorney John Bennett noted.

“This is what I call a ‘do-gooder’ project,” Akre said. “This is our gift to Rappahannock and Washington.”

Dietel said additional information about the project — as well as a place where questions can be asked and other ideas for the property submitted — will be available soon online at blackkettlecommons.com.

In other actions, the council’s vote to appoint Goodine to its ranks was unanimous. Goodine will serve out the term of Joan Platt, who resigned last month. Of her previous time on the council, much of it while the council worked out the often-contentious plan to create a wastewater system, “Jean Goodine served with great distinction,” said council member Mary Ann Kuhn.

A resolution allowing the town to begin accepting electronic payments for water and sewer bills — and meals and lodging tax payments, zoning fees and more — also passed unanimously. Town residents will get a notice with their next water/sewer bills with a link to the online payment system. Council member Joe Whited said the system could save the town, on a monthly basis, some $50 in postage and 40 to 60 hours of town clerk Barbara Batson’s printing-and-mailing time. It will not cost the town anything more than a $100 startup fee to Atlantic Union Bank; a 3-percent transaction fee would be paid by those who use the system.

The council also unanimously adopted a resolution honoring the life and memory of Raymond Gooch, who served for more than a decade on the council until 1998, and who died in October following a serious car crash in Flint Hill. The resolution recognizes Gooch as “an advocate for the integrity of democratic governance as a town official as well as a town resident for nearly 50 years.” Gooch used his position, the resolution adds, “to foster an atmosphere of mutual trust and justice and to create positive change during his tenure, especially during times of considerable controversy.”

Resolution Honoring the Life and Memory of Raymond L. Gooch

Whereas, Raymond L. Gooch unselfishly dedicated many years of service to the Town of Washington, Virginia and its community; and

Whereas, Raymond L. Gooch served the citizens of the town over several decades, including 11 years as a Town Councilman and Secretary to the Town Council (1987-1998) and several years as a member of the Board of Zoning Appeals until his untimely death on October 27, 2020; and

Whereas, Raymond L. Gooch used his position as a member of the Town Council to foster an atmosphere of mutual trust and justice and to create positive change during his tenure especially during times of considerable controversy; and

Whereas, Raymond L. Gooch was an advocate for the integrity of democratic governance as a town official as well as a town resident for nearly 50 years, exhibiting respect and honor and a high level of ethics as well as devotion to the town; and

Whereas, Raymond L. Gooch encouraged collaboration and shared visions in chairing the committee on The Future of the Town and authoring its highly regarded report; and

Whereas, Raymond L. Gooch extended to his county his commitment to service and volunteerism by serving as the president of the Rappahannock Historical Society at a time of great change, overseeing the expansion of the existing building; and

Whereas Raymond L. Gooch served his school community by volunteering to participate in an afterschool reading program for elementary school students and packing weekend backpacks of food for children in need;

NOW, THEREFORE BE IT RESOLVED, the Town Council of the Town of Washington hereby expresses its appreciation and gratitude for the leadership and contributions of Raymond L. Gooch and honors his memory for a life of outstanding public service;

BE IT FURTHER RESOLVED, that this Resolution be included in the minutes of this meeting and a copy presented to the family of Raymond L. Gooch as a token of the Council's appreciation and sincere thanks.

Adopted this 14th day of December, 2020, by unanimous proclamation of the Town Council of the Town of Washington, Virginia