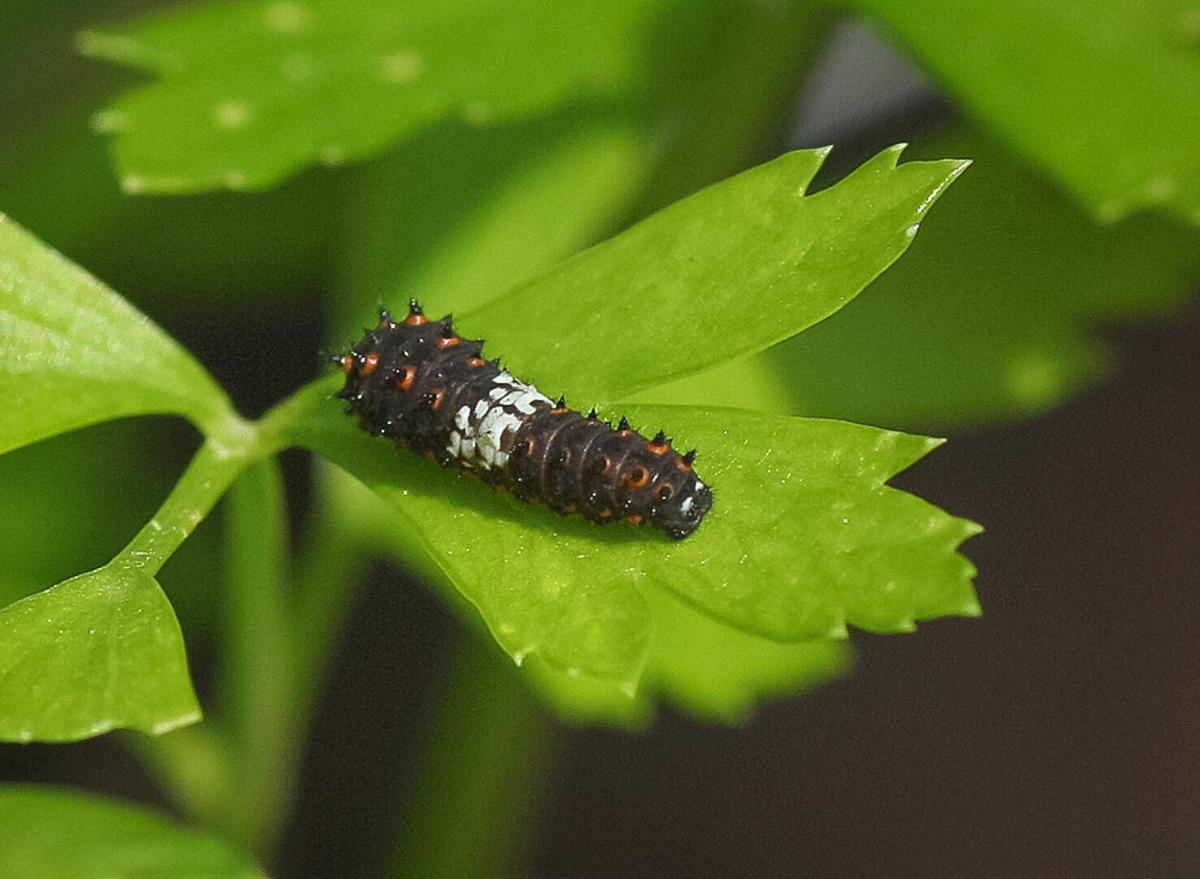 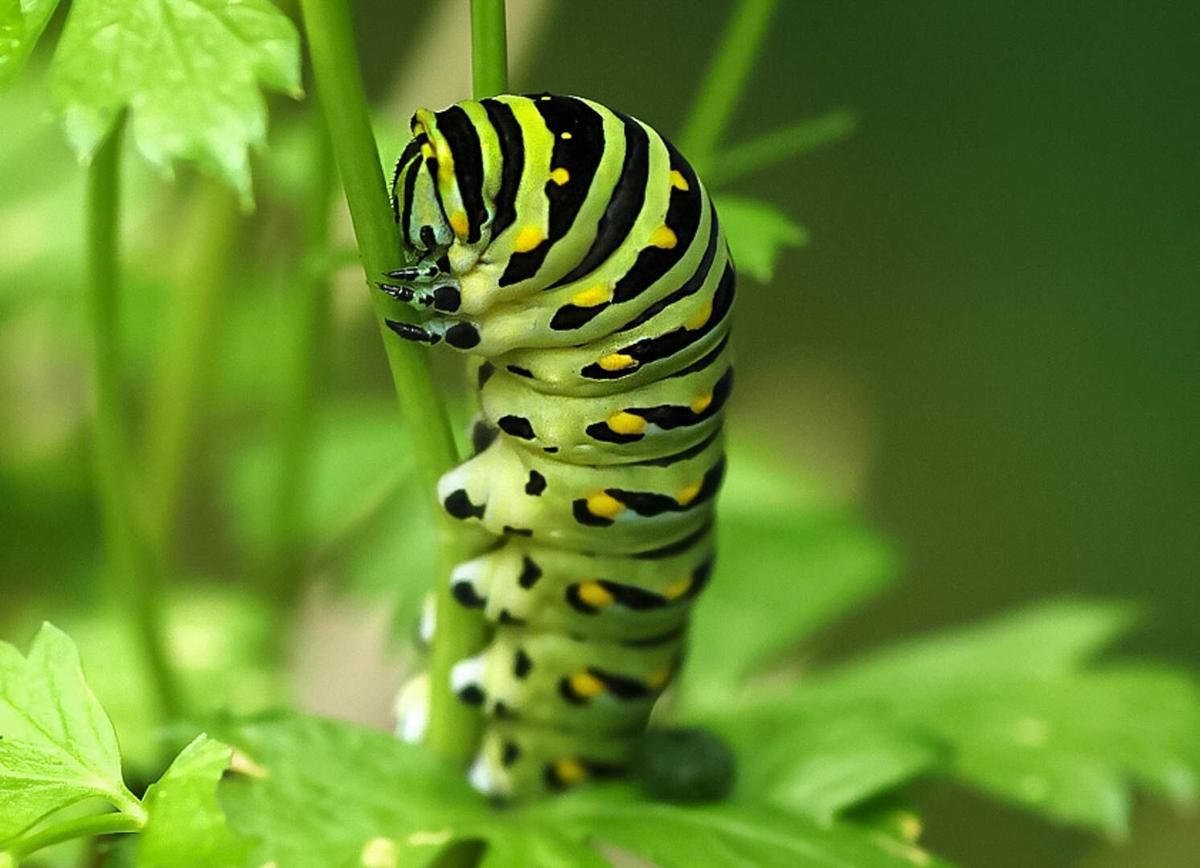 As the caterpillar moves through its instars, its color, as well as size, changes 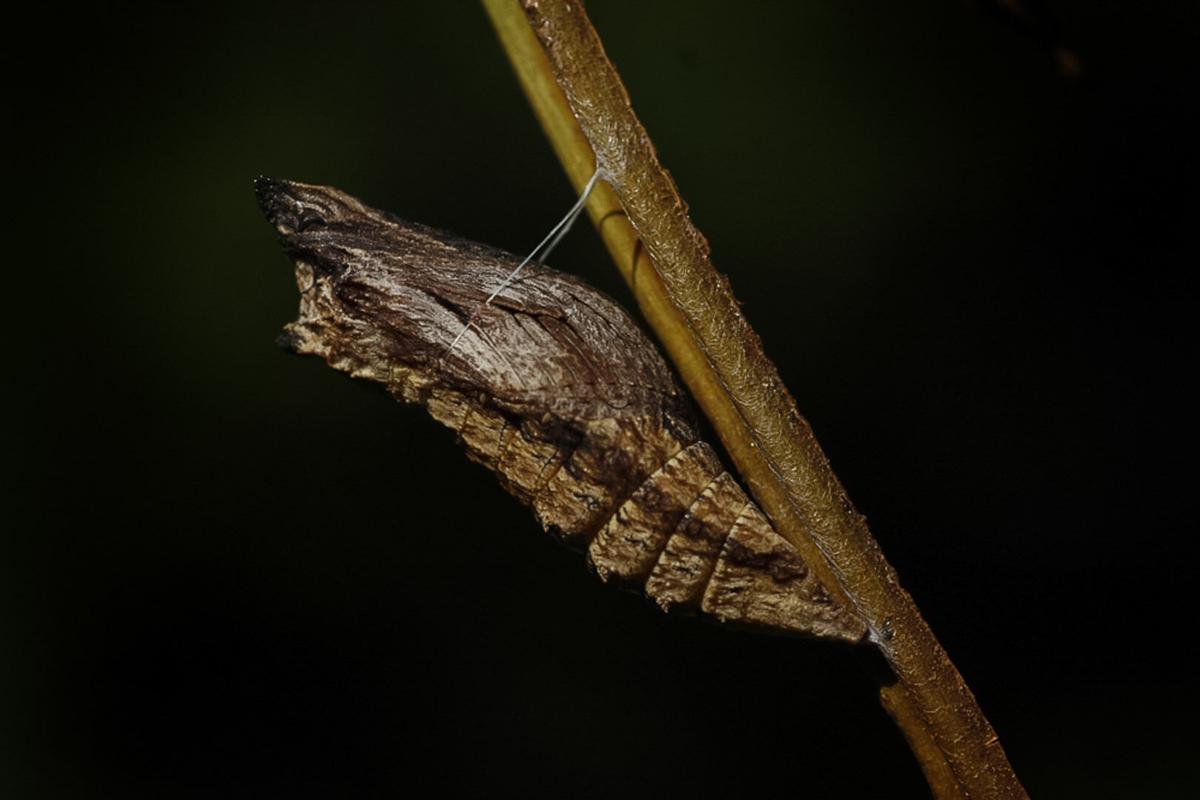 When the caterpillars pupate, their chrysalises blend in with the tree or shrub to which they attach themselves 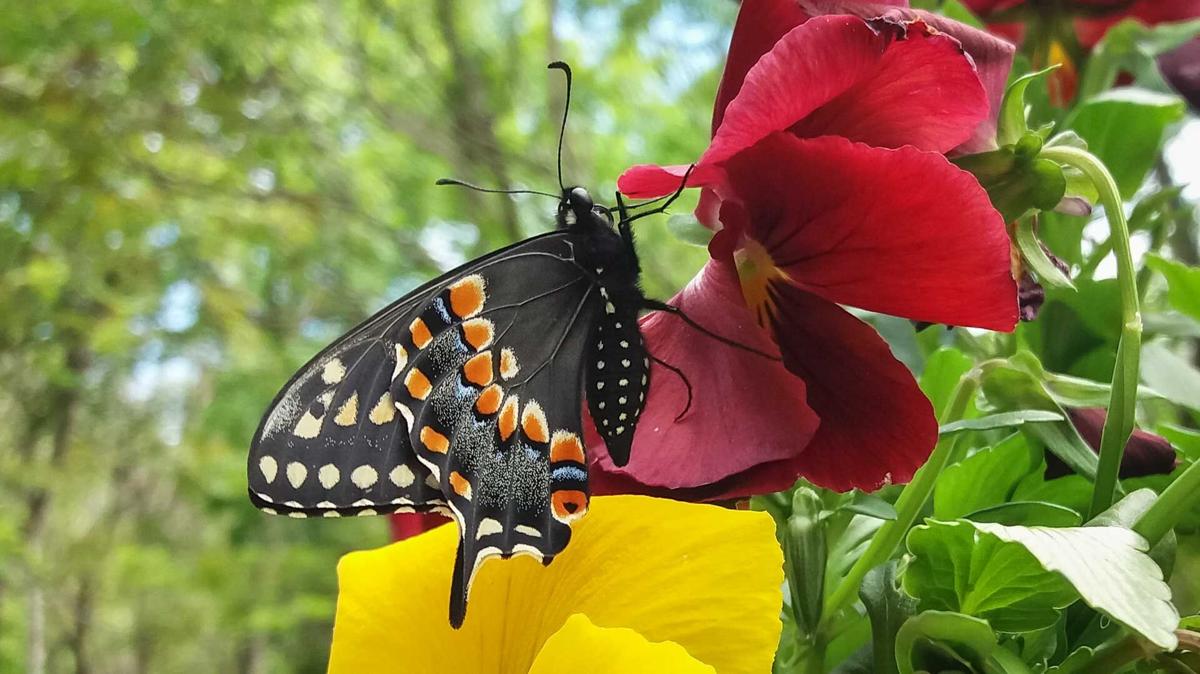 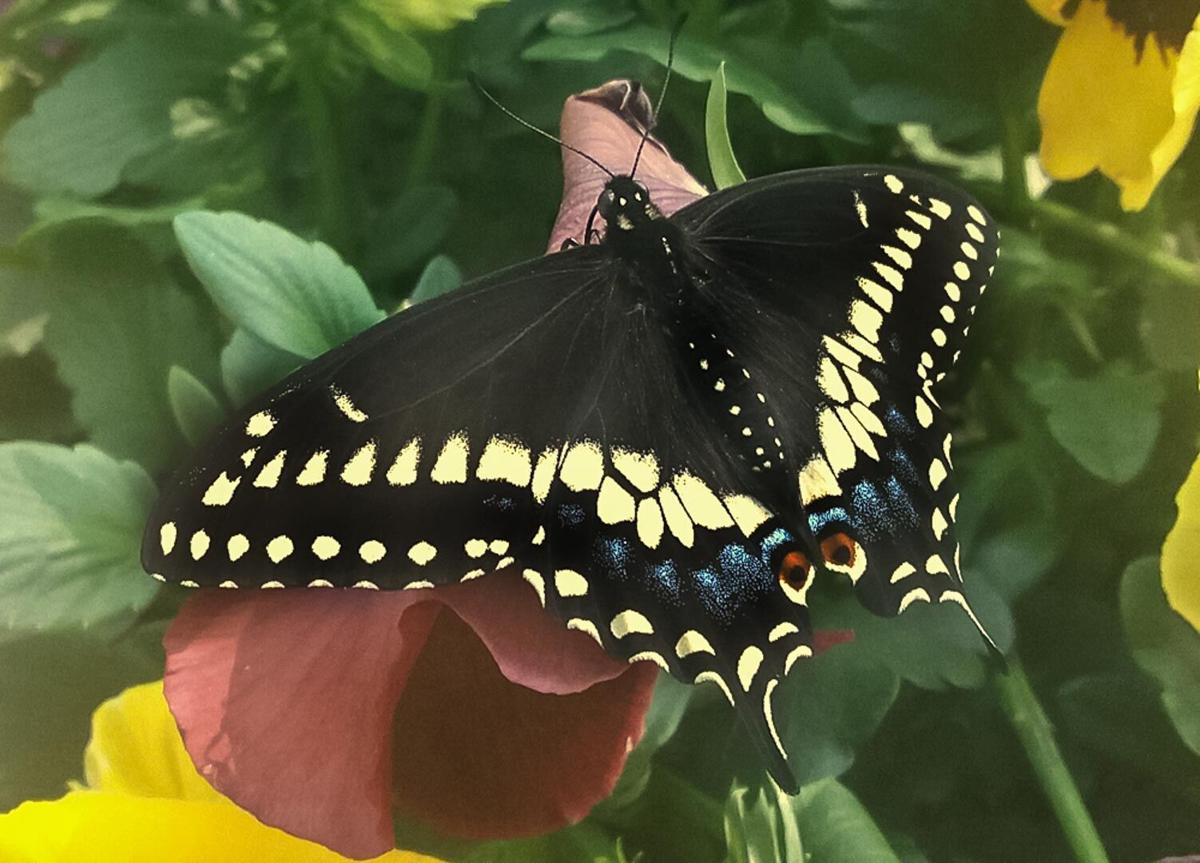 A dorsal view of the same butterfly

Early last September, I was surprised to find some eastern black swallowtail caterpillars feeding on a pot of parsley on my deck and decided to foster them in hopes of seeing their amazing metamorphosis into adult butterflies.

The last generation of the year of some butterflies, including swallowtails, overwinter as chrysalises (pupae) while other species migrate to warmer climes. When caterpillars pupate, they form a hard case around them, with the caterpillar inside turning into DNA soup. In the spring, this soup metamorphizes into the adult butterfly. Overwintering species are cold hardy and, with their early emergence, can produce several generations before fall.

I live in a mostly wooded area, so the host plants of most swallowtail butterflies I see are trees and shrubs. These include the eastern tiger swallowtail and spicebush swallowtail, along with the occasional zebra swallowtail, which is about a third smaller. I’d never seen an eastern black swallowtail (Papilio polyxenes asterius) here, so I assumed its host plant was also not here, but I never checked. So how did the caterpillars end up on my deck?

I couldn’t imagine that a female would even have been looking for a plant on which to put her eggs in this neighborhood. In finally checking on this swallowtail’s host plants, I found that the main ones were in the carrot family, mostly nonnative, including parsley but also Queen Anne’s lace, which is quite abundant in open spaces here.

All the cats were in early instars (developmental stage), in which they look like bird poop — an evolutionary adaptation that deters predators. One of them disappeared early on, but the other two worked their way through all five instars, ending up bright green with black stripes and yellow dots accenting the latter, giving the black stripes a wavelike effect. At the end of one’s final instar, it stopped eating and started moving off the parsley. These are signs it was getting ready to pupate, as I had learned fostering other swallowtail cats.

Knowing swallowtail cats prefer to attach themselves to a woody plant to pupate, I put a twig in my Port-a-Bug mesh cage, along with the cat, and hung the cage from a light above my deck. The cat soon produced a thread, hanging from it as it formed a hard shell around itself that changed from green to brown, mimicking a twig. Inside this chrysalis, the cat would turn into DNA soup. If it survived the winter, this soup would miraculously transform into an adult butterfly in the spring.

A few days later, the other cat was ready to pupate, so I put it in another small-critter cage on a table beneath the other cage. There the chrysalises would experience the winter weather as they would in the wild but sheltered from the worst of it.

As spring approached, I anxiously watched the two chrysalises for signs of adults emerging. Swallowtails, which usually emerge early in spring, have evolved to handle cold temperatures up to a point, and eastern tiger swallowtails had been flying on warm days since early March, between freezes. But April arrived with still no change in the chrysalises. After missing the emergence of adults when fostering other butterflies, I was hoping that this time I’d get lucky.

Then, just before dark on May 5,I found an adult male had finally come out of the first chrysalis. He had already unfolded his wings, slowly fluttering them, and was hanging on the mesh side of the cage’s interior.

His coloration resembled many other dark swallowtails: two rows of pale-yellow spots across the top of his forewings and hindwings, with a dusting of blue between the spots on the hindwings, and two orange, eyelike dots below the blue. On the underside of the hindwings were rows of orange dots edged in pale yellow. Rows of pale-yellow dots also ran down his body.

With light fading and the temperature dropping, I decided it would be better for the butterfly to spend the night inside in the cage. I put it in an unheated room to keep him from becoming too active and possibly injuring his wings against the sides of the cage, or just burning up fuel he would need once he was released.

The next morning was still too chilly for the butterfly to fly, so I placed him on a pot of pansies and took some photos, then loosely covered the pot with a mesh dryer bag to protect the butterfly from predators while he warmed up. I kept checking on him, and I finally found he had disappeared. I hoped he had made it to the shelter of the copse a few feet away and found a place to survive the freeze that was forecast for that night.

Eleven days later, on a warm morning, another male finally emerged from the other chrysalis and looked ready to take off. I was disappointed in missing his emergence but glad he had survived. I put him on the pot of pansies, and he soon clumsily took off, veering out of sight below the deck. I went down to try to find him, with no luck. I hoped he had also made it to the copse.

These adult butterflies have only one purpose in the two months before they perish — find a mate and reproduce. Every time I see a black butterfly fly by, I try to see if it’s an eastern black swallowtail. So far, no luck, but I had overwintered the parsley plants that had hosted the caterpillars and put them back outside. I keep checking them, hoping to find what could be the offspring of my fostered cats.

Learn more about Pam’s experience with the black swallowtails and other nature adventures, with lots of nature photos and slideshows, at her new Wild Ideas blog.