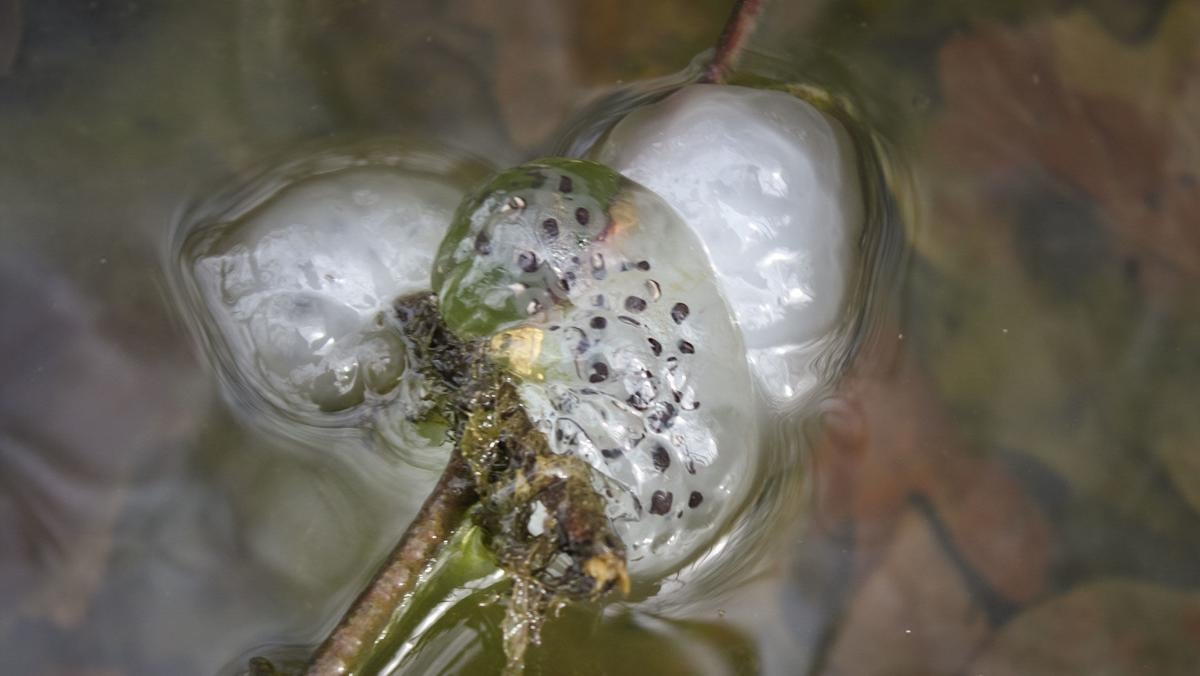 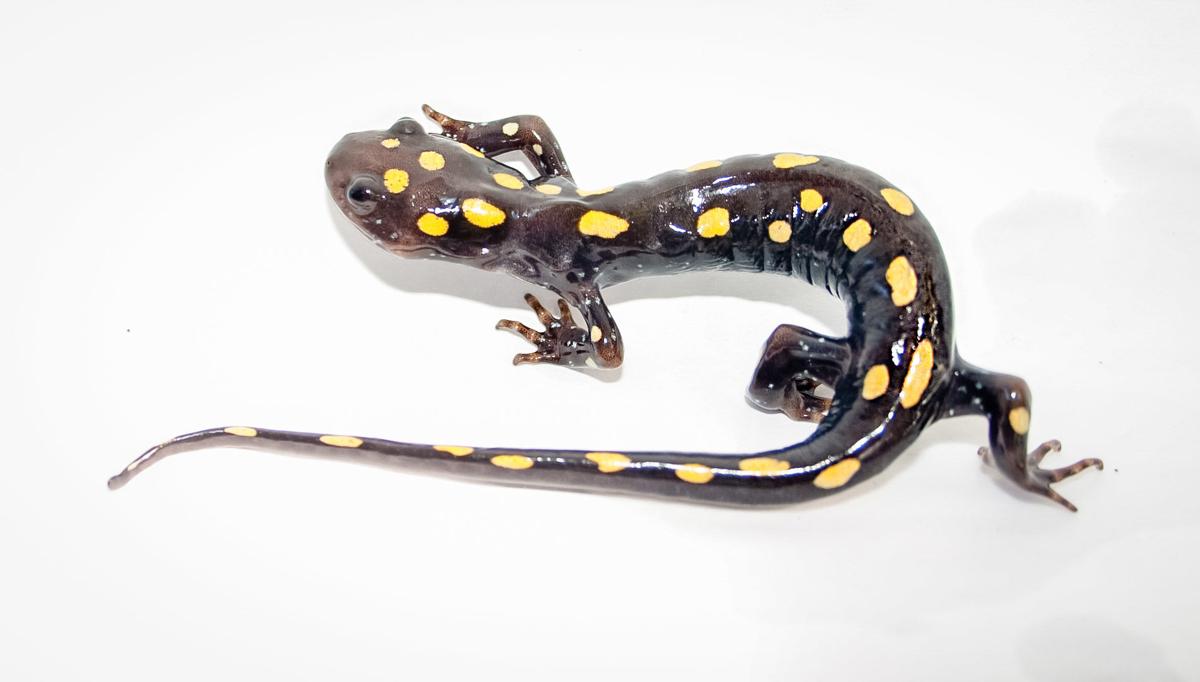 The elusive spotted salamander spends most of its life underground, migrating to pools to breed during warm, wet spells in late winter or early spring. 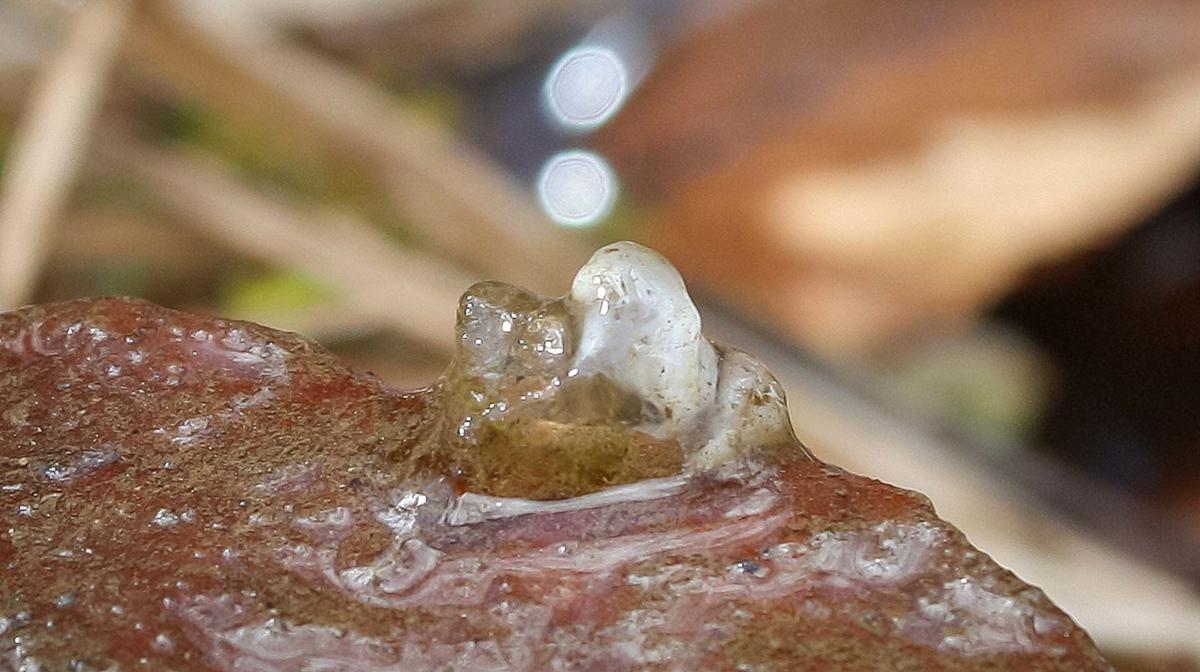 During warm spells this month, I’ve been checking the pond in the forest above my house for egg masses of spotted salamander and wood frog, usually the first two terrestrial amphibians to breed there every year.

Global warming has made it harder to tell which amphibians are breeding merely by when their eggs appear. But, although Virginia has lots of salamander species, others breed later in the year, not in ponds, lay eggs one at one time (like the eastern newt), or they are not known to inhabit Rappahannock County, according to the Virginia Fish and Wildlife Information Service (VFWIS).

It wasn’t until Feb. 17, less than a week after a warm, wet spell, that I finally found spotted salamander egg masses in the pond. Dozens of the globular masses, wrapped in an extra outer envelope of jelly, were attached to submerged stems in the center of the shallow pond. Some were clear enough to see the larvae inside, but most were cloudy or covered with silt, which is often the case. There was no sign yet of wood frogs, which usually breed around the same time. They also attach their egg masses to submerged branches, but each mass doesn’t have the outer envelope and is spread out more over the surface of the pond.

The spotted salamander (Ambystoma maculatum) is a mysterious creature. In the mole salamander genus, it spends most of its adult life hidden underground in forests, only returning to water to breed, and then at night. This may explain why some details about its life history vary across the many sources I checked. I pieced the information below together from various sources, much of it from my favorite salamander reference, James W. Petranka’s “Salamanders of the United States and Canada.” Petranka pulls together the results of many studies of each species up to 1998, when the book was published.

The breeding behavior of the spotted salamander can vary across the species’ range and between populations. While some populations can start their migration to a pool en masse, others may spread out their breeding over a month, or breed erratically, even skipping a year. Individuals have been found to be loyal to a specific pool, bypassing others on their journey. Like many other amphibians, they may be loyal to the pools where their lives began.

In Virginia, according to VFWIS, the breeding migration of spotted salamanders can be triggered any time in winter through early spring under the following conditions: warming soil, air temperature of at least 55 degrees and rain. They begin their courtship in the shallow areas of ponds, where the males deposit s (jelly-wrapped packets of sperm) on the bottom. A male will court a female, rubbing against her to stimulate her into picking up his packet with her cloaca, an orificethat serves both excretion and reproduction functions. Female spotted salamanders can be fickle and instead choose a from another male.

The female lays her egg masses a few nights later, taking refuge under forest litter near the pool during the days in between. Once done with laying, each female disappears back into the forest — along the same path she took to the pool, one study found — perhaps ending up in the same burrow from which she had come.

Relatively large (4.4-7.8 inches long), the spotted salamander has bright yellow spots that stand out against its dusky background color. I’ve only ever seen one of these salamanders — it’s striking appearance dulled by spending the night in another breeding pool. While I’d love to see live ones in action, the idea of slogging up the mountain on a rainy night has been too daunting. However, this time, with more rain forecast for the next night, I finally did go. I started up the trail just after dark, when these salamanders usually get active.

Climbing up over the dam, I surveyed the pond by the light of a headlamp I’d attached to my hat. As on my previous trip, newts and some of last year’s overwintering tadpoles were swimming around in the water. On the far shore, a pair of gleaming red eyes were moving down the mountain. They belonged to a large raccoon, which I warned off after it started sauntering around the pond toward me. It may also have been attracted by the prospect of finding the salamanders, but to feast on rather than to observe.

After more an hour of fruitless but not unpleasant waiting, I gave up and made my way back down to my house. Perhaps the light sprinkle of rain that evening was insufficient, or maybe salamanders were done for the year. In subsequent visits to the pond during the day, I found the number of egg masses seemed about the same.

A few days after my nocturnal visit to the pond, I contacted Rappahannock Nature Camp director Lyt Wood about amphibian breeding activity at his place, south of Sperryville. His amphibians usually crank up before mine, probably because of the difference in elevation. Lyt reported that, unlike most years, spring peepers had started calling in a nearby meadow a week before wood frogs started at his small frog pond. He added that, although spotted salamanders usually breed before the frogs, he’d seen “only one (very fresh) egg mass” of the salamander so far.

By the end of the third week, with skunk cabbage blooming and early-emerging butterflies flying, I was eager to see more signs that spring was on its way. Warmish, rainy nights were forecast for the last week in February, and I’m planning more nocturnal expeditions to the upper pond. Even if the salamanders are done, the wood frogs should be starting, then the peepers, the pickerels ...

Scattered thunderstorms in the morning becoming more widespread in the afternoon. High 81F. Winds light and variable. Chance of rain 80%.